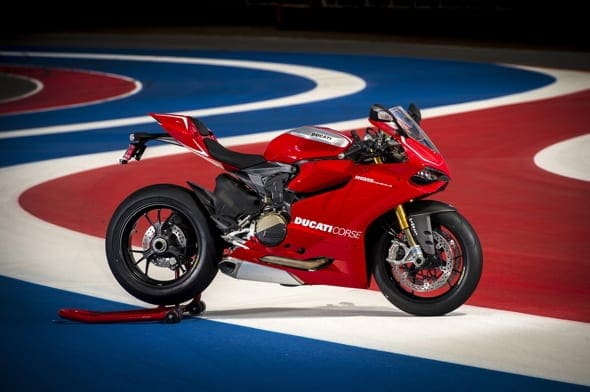 It’s hard not to look at this new Circuit of the Americas track and concentrate solely on the bike – even one as special as this. But concentrate you must with the new Ducati Panigale 1199R, because the changes are subtle – so you have to hone in on their significance to understand the reasoning behind the changes.

So let’s get a few things straight. It’s a beautiful bike, much like the current incarnations – the stocker and the S model. It’s got the fancy Ohlins DES electric suspension (again, like the S), the incredible Brembo M50 calipers that we’ve raved about (standard on all models), and the storming 195bhp Superquadro motor that is prised into every model. So what extra has the R got? Not much, to be honest. For your £26,550 you get, amongst other things, a lighter flywheel and titanium conrods to get the motor spinning up quicker. Because of these new components, Ducati has upped the rev limit by 500rpm, and because of this shorter gearing has been introduced to, er, pep up acceleration of this rocketship. If only the track had a kilometre long straight to put it to the sword…

Ducati boss, Claudio Domenicali, talked us through the other changes; some electronics tweaks, the EVO exhaust system and the swathes of carbon, as well as explaining why the factory opted for an adjustable swingarm pivot point (basically to help racers find a better set up). Then we were led into the garages at the new Circuit of the Americas and presented with £500,000 worth of 1199Rs. Yup, this was a very special moment.

The circuit, COTA, is a sight to behold. If you’ve seen it in F1 then you’ll know that it’s the most impressive inclusion to the calendar. And when MotoGP heads there in a few weeks the racing will be spectacular. As for learning it in a few short sessions – well, that’s a different matter on an 1199R. You can read all about it in the June edition of Fast Bikes (out on 30th April), but if you’ve got one on order, or plan on robbing a bank any time soon, then you won’t be disappointed. But that’s mainly because the stock and S model bikes are so amazing to start with. The R adds to the show – but not in the ways of the Rs of old.

The Kentucky Kid, Nicky Hayden, was on hand to show us the lines (for those of us who could keep up for more than a corner), and this really is a machine best suited to someone with skills approaching that of Hayden. The R model has always been destined for racing, and that Ducatisti collectors hoard them is almost an irrelevance to the firm (except to the bottom line…).

But there’s no getting away from the fact that it is a magnificent bike, one that defines the Ducati firm and puts it right back in the running to becoming the best bike in the world. Testing this against the revised Aprilia RSV4 Factory and the new BMW HP4 is going to be epic.