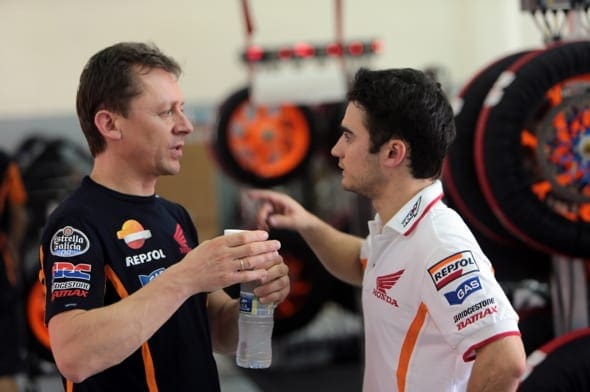 If anyone in the World Championship paddock knows Dani Pedrosa –apart from his mentor Alberto Puig, it’s Mike Leitner, his race engineer. The Austrian begins his tenth season alongside the Repsol Honda team rider, after their paths crossed for the first time in 2004 when Pedrosa moved up to 250cc. Satisfied with their work together so far, Leitner speaks openly about his relationship with the rider, discusses the preseason and remembers some of the best moments that he has had with Pedrosa.

How did the test in Austin go?
“It was a rather interesting test. The objective was clear: To understand the track and see what kind of characteristics it has. It all went well and we more or less got what we needed out of it. The grip level still wasn’t optimal, because not many riders were there, but in general it was a very good test.”

What kind of a track is it, technically speaking?
“I think that it is a track that has a bit of everything. It has climbs, dips… Turn 1 is very special, because you are braking very hard on an incline. Then on Turn 2 you are dropping down and have a string of corners linked together in third gear. There are some very sharp braking sections and, in general, it is a very technical track.”

Did you have a lot of chatter in Austin?
“Up to now that hasn’t been a big problem, because the grip level isn’t the same as it will be when we go racing. We hope that when the three classes are there and we have more bikes on the track, that the grip and the bike behaviour will change.”

Can we say that it is a track that suits Honda or Yamaha more?
“No, it is difficult to say that before a race weekend. It was a test, and Yamaha were only there for two days. But I think that both bikes have positive sections and maybe less positive ones. In the end, the lap times will be very similar.”

Do you think that the level for Honda and Yamaha is similar at the moment?
“I don’t know exactly what the Yamaha is like, because I’m not allowed to touch it and can only see it from the outside, but I am sure that we will see another close season. Like last year, Yamaha has some advantages and so do we, but in the end it will be our two factories who fight for the wins.”

What do you think of Dani Pedrosa’s preseason so far?
“He’s done very well up to now. In Sepang we had some good tests and also in Austin. In America we tried to make adequate changes for the track, without going crazy about it. In Sepang I had the same feeling. The lap times can be slower or faster, but in general we are working well.”

After so many years with Dani, sometimes a look between you must be sufficient.
“True. We’ve been together since 2004, when Dani was in 250cc. Over the years you learn to know what the rider wants, but you always need to listen and understand the feelings of the rider. The understanding with him and the team is very good. The relationship works.”

Is Dani in his best form, or can he still improve further?
“His performance in the second half of last season suggests he is really at his best. When you win, say, six of the last eight races, you are at the maximum level. However, there is always some room for improvement. You will not take giant steps forward anymore, but you can always improve something.”

What is the most special win or moment in your time together?
“For sure, the first win is always the most special. It was in 250cc, in Welkom, South Africa. It was the first race in a new category for us, with a new team, and we won. That was a very special moment for all of us and we understood that we had put together a unique group. Since that time we have experienced great moments –and also some bad ones– but the rider –team combination has stuck together. This is the important thing.”