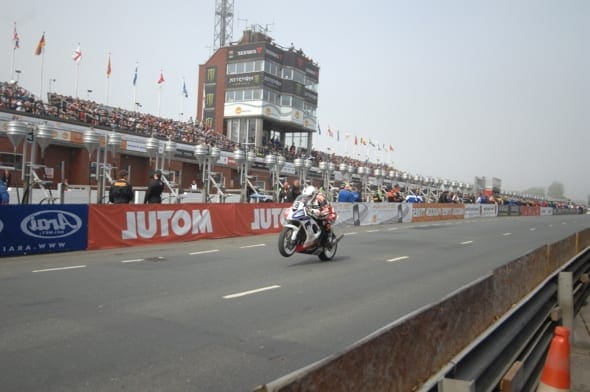 After a long consultation between the TT race committee, the Manx authorities, the ACU, riders and teams, the Isle of Man TT will controversially run backwards from 2015.

The move, designed to inject new stimulus into the now dull racing and local kipper and queenie economy, has been given the green light after a protracted 15 minute consultation process at the Creg-ny-baa Hotel. The last time a variation was made to the course was back in the 1950s when part of the Clypse course incorporated what we know now as the mountain Course – but in reverse from Douglas to the Creg and then back through Laxey and Onchan. Another addition in 2015 will be a long jump competition at Ballaugh Bridge, decent stoppies at the pit box will be awarded a 10 second time deduction and a meat raffle for all the riders.

The Isle of Man government supports the idea, largely because of the Manx symbol – the three legs that can stand up however it’s placed. Lieutenant Governor Adam Wood said, “It makes sense that if the triskelion can be as flexible as it is then the TT track should be too. I was in favour of switching per race, but I believe some racers were against this suggestion. None of them wanted to go both ways.”

19 times winner John McGuinness was instrumental in the campaign, mainly to confuse Guy Martin, and the Morecambe Missile plans to extend his career by winner the same number of races the other way round before retiring by the age of 80. On the changes McGuinness said, “Aye, when I heard this was a possibility I jumped at the chance after checking that it was alright with the fairies at Fairy Bridge. I mean, who wouldn’t want to knock a bit of speed off by going up Bray Hill rather than going down – my balls aren’t getting any bigger you know. I hope they’ve got the brakes sorted for the run into Ramsey because that could get a bit hairy and Hailwood ride going downhill should see the bikes do about 300mph.”

The change will benefit new riders to the Island in 2015, with everyone having to learn the track from scratch. Rumours that Manx resident Cal Crutchlow will stake a claim on the new course are as yet unfounded, but TT stalwart Steve Parrish reckons that the level playing field will attract a new breed of bounty hunters, “I quite fancy this myself, to be honest. I’ll have to investigate a get-out clause of my BBC contract, but I can’t see any reason why I couldn’t dust off the old leathers and finish five seconds ahead of McGuinness.” Speaking of television, a deal is in place with the BBC for the first practice session to run alongside Total Wipeout. Coverage after this will revert to ITV19.

Not everyone is happy, mind. Comments from the Dunlop brothers are unbroadcastable (just to be on the safe side), while fans favourite Guy Martin is upset that it may interfere with his 2015 TV commitments to a new show called ‘Being Fred Dibnah’ and a Channel Four project called One Man and his Dog Making a Steam Powered Washing Machine on Ice. 2013 newcomer Josh Brookes, who hails from a land where the water goes down the plug hole the wrong way, is said to be ‘indifferent’.

A parade lap to introduce fans and riders is being planned into the 2013 schedule, so if you’re over on the Island this summer don’t forget to turn right out of the grandstand, not left!