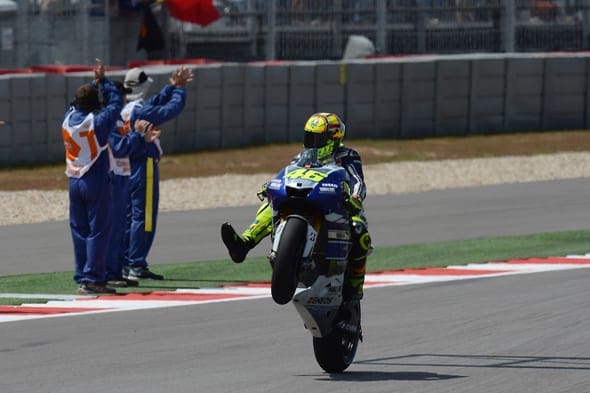 It has been announced today that BT Sport will have exclusive rights to MotoGP for the next five years. The elite class will be aired for the whole race weekend, including Friday’s free practice sessions and you’ll also get full coverage of Moto2 and Moto3.

Coverage will be hosted on-site with additional studio coverage from BT Sport’s new facilities at the Olympic Park in London. The MotoGP line up will also feature additional motorcycle-related programming in between Grand Prix weekends.

The shitter is, unless you’ve got BT broadband it won’t be free. In fact it’ll cost £15, which is enough to deter a huge amount of folk.

BT Vision and YouView viewers will be able to catch up on any live action they miss as BT Sport will make the programming available on demand, on television and on digital.

Simon Green, Head of BT Sport, said: “The agreement with MotoGP is really exciting. We want BT Sport to offer a wide range of sports that appeal to many different audiences and MotoGP is a thrilling sport with a massive and committed fan base in the UK and Ireland.”

As for presenters, who knows? We’re betting on the return of Keith Huewen to partner Julian Ryder.