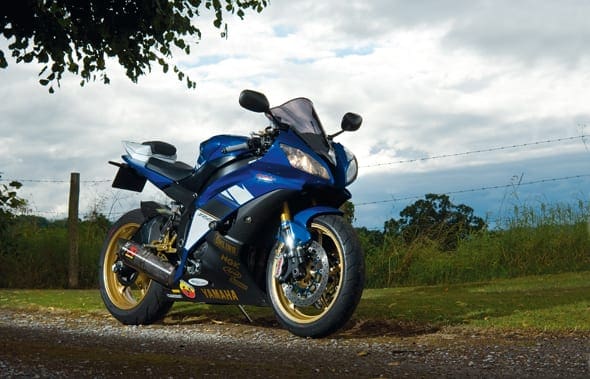 Yamaha’s YZF-R6 is the closest thing to a road legal 600cc race bike, and it’s hamstrung at the production line with electronics that restrict respectable tuning and power gains – witnessed, frustratingly, with my longtermer from a few years ago.

This isn’t a fresh revelation. When Yamaha went banzai in 2006, tuning was tricky and still fickle, and when the variable inlets and ride-by-wire updates came on stream in 2008, wanging on an end-can did bugger all – except prompting early onset deafness. 2008’s screamer, essentially the same bike as 2010’s bar a longer exhaust and ECU revisions, can be wrestled from the used market for nearly half the price of this season’s slightly more civilised track assassin, and a few choice mods can transform it into a 675-muncher.

That’s exactly what Fast Bikes reader Bob Chivers has done. After sourcing a bargain at the now defunct George White’s, complete with a few minor bolt-on goodies, Bob set to work. He was no stranger to the R6’s unyielding will for 110 per cent, as he previously owned a 2007 model, but now was on a very similar mission to remedy his Y-Zee.

Our biggest gripes with the R6 aren’t acutely malignant, although you’ll never alter the focused attitude of the R6 – that’s no bad thing, considering the ‘user-friendliness’ and nicey-nicey nature of its rivals that are finding favour in the showrooms.

2008’s over-sprung, under-damped suspension is the first of the units to overhaul/replace, unless you like your botty bumping up and down. There’s plenty of adjustment there, but the parameters are severely limited with the stock clickers. So, Bob’s first move was to source an Öhlins TTX shock and a set of internals for the fork, which transforms its road holding and bump management. The Swedish kit also neutralises steering, allowing the chassis to cope better and offering a far plusher ride.

The TTX shock expels the soft-initially-hard-after-an-inch feel and improves throttle to arse-end connectivity. The Öhlins fork internals may have lost the twin-speed compression damping, but in return they’ve given the R6 a more controlled stroke, all the way through, rather than the two-stage action of the stock. Showing an extra 5mm through the yokes has also quickened the steering slightly.

Next on the chassis wish-list was to sort was the brakes. The standard paraphernalia is utter shit, despite the ‘Brembo’ master cylinder that leaves the factory (it’s about ten years old). Replacing pads and introducing braided lines will stop the rot, but you have to go balls-deep with the anchors for the full effect.

There’s plenty on offer but none provide the quality and feel of the Brembo M4s, not to mention ball-breaking stopping power (you’ll need fabricated 10mm caliper spacers, though). They also give the lively standard slipper clutch an easier ride and banish previous corner entry ‘mares. Bob also replaced the OE Brembo master cylinder for a proper RCS 19 unit from the Italian factory, which makes another tangible progression.

Without serious input (ECU hacking), you’re never going to eradicate the motor’s hunger for redline action. The R6 doesn’t function below 10,000rpm but Bob gave the motor some loving without opening the crankcases, a la superstock spec.

An Akrapovic full-system plumps up the midrange slightly and then howitzers the already frantic top-end. But it’s the all-round package that makes this R6 special in the pants department. Bob opted for the Power Commander V with a Dynojet quickshifter wired in. There’s also a K&N filter, without the backing plate, and the result is a healthy 118bhp.

This is a class example of how to renovate a bike like the R6 without catastrophic cost and over-doing things. The package means that 1000cc pilots won’t make a getaway on the roads as Bob has essentially fixed the 2008 R6. There are a few trivial bling items that Bob reckons he has reasonable alibis for, other than looking full-factory, but aside from a quick-action throttle to further exaggerate the power delivery, there aren’t many options left. Carbon wheels on an R6 wouldn’t work as it’s lively at the best of times, so reducing unsprung weight would encourage even more sketchiness. It’s job done.

We’ve seen low-mileage 2006/7 models going for £4k all day long, and you can live without the YCC-T and over-complicated electronics. A few grand on top of the donor bike will see you good for a suzzie overhaul, a few extra ponies, and a trick anchor setup. There are no excuses now, so what are you waiting for?