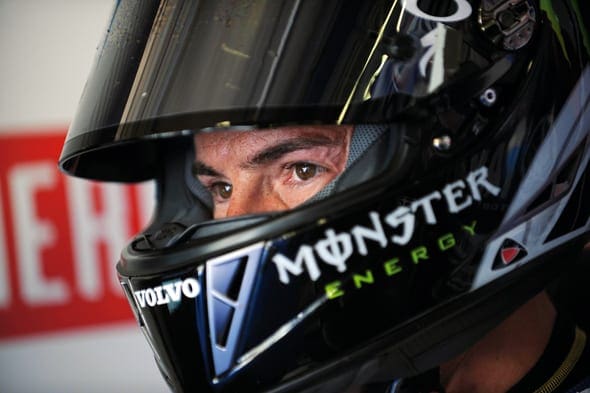 A break in more ways than one, though, as those rides got him noticed by GSE Racing.

“Ha, yeah it was my big break. I’d not ridden for over eight months and in 2001 I found myself sitting on a fully fledged Ducati superbike in WSB. I had targets I had to achieve to stay with the team, though weirdly I never quite met them. I was always a single place in the championship out, yet they retained me each season. I think it was because of rides, like beating Colin Edwards and Troy Bayliss at Sugo, that they kept the faith. Neil Hodgson was my team-mate, and I learnt a lot from him. I finished 13th that year, and seventh the next, when I got my first ever WSB podium at Assen. Not many teams support riders the way GSE did for me. I was lucky, but I did give them a third-place in the series in 2003, also taking my first win. Actually, that was a battle against Neil Hodgson in Germany. He was going for the record of ‘wins in a row’ and I barged him out of any chance of that, literally! We have a laugh and joke about it these days, but I’ll bet there’s still a part of him inside that ain’t laughing!” said James, with relish.

But that third place, and the fact Hodgson moved to MotoGP, meant a factory seat became free for James in 2004.

“I was so made up. On a factory Ducati and on Michelin tyres! Then it was suddenly made into a spec’ tyre rule, so most of the factory teams left, and I was gutted! All on the same rubber, and nearly everyone had a Ducati!

“I honestly struggled with the new Ducati 999 at first, a lot of people did. You may remember Frankie Chili infuriating Ducati by using a 999 engine in his 998 chassis. I wish we could have done that, but by season’s end we had it dialled in,” he said.

And what an end to the year, a debut WSB title, yet a pissed off team-manager in Davide Tardozzi. Cheers, Dave!

“I know, we all saw the TV when he didn’t look very happy. But look, I went into the last round five points behind Regis Laconi, his home round in France, and he’d won the last three races. Were I a betting man, I wouldn’t have bet on myself either! I knew there was a celebration plan in place for him, his name and number ‘1’ was on everything they had ready. Whoever won the title was also supposed to go race in the last round of AMA – they’d booked the flights in Regis’ name before we’d even raced!

“But what did annoy me, was that they didn’t have anything at all with my name on it, not even ‘just in case’. They all thought Regis was guaranteed to win. But I had my family and friends there so, yeah, I saw Davide’s face, but honestly I didn’t care. The following season, they fitted the bikes with traction control, and electronic errors saw me thrown off and seriously bashed about. As such, 2005 was a write off and by 2006 I was a privateer.”

With Ten Kate Honda, James would go on to be the only privateer in recent years to win the title, though it wasn’t easy.

“I had Max Biaggi, Troy Bayliss and Nori Haga all at the top of their game that year. They had everything, factory backing and traction control, I just had a bloody fast bike. It was a handful at times! My overriding memories from that year all involve Bayliss. Beating him at Phillip Island, at his home race, will stay with me forever. He wasn’t happy about that, but he got revenge at Assen. I bridged three seconds to lead him out of the final chicane when my bike started to wheelie. I let it continue thinking I’d beaten him, but he snuck past and I was devastated! The last one was at Donington. We forged ahead and were running superpole pace lap after lap, I was dying in my lid, the effort was super-human and I knew one of us was going to crash. Unluckily for Troy, it was him, and I was so relieved!” exclaimed the former WSB champ.

Mid-2007, James signed for Yamaha, and appeared on the BBC’s Sports Personality show, playing his piano. A few bitched about it, but that five minutes did more good for the public perception of bike racing than anything else had in a decade.

“It was amazing they gave me that much time, and I was only beaten into fourth place by Ricky Hatton, by just 128 votes! Even that didn’t compare to qualifying second at my first MotoGP race, though. I’ll always be satisfied with my first GP season. Don’t forget, there were more bikes on the grid then, too. I was also satisfied with the complaints against my aggressiveness from a lot of the established riders out there. I’d rattled them, but was never hauled into race-control,” he laughed.

“Those two crashes I had pre-season, nobody will ever be able to understand how big they were unless they’ve experienced it themselves. I still had a few top-six places, but Ben Spies was my downfall. Had he stayed in WSB I would have kept my ride, but I truly think he deserved it and I didn’t do enough to keep my job, it’s as simple as that. It isn’t easy in MotoGP, just ask Cal Crutchlow. I spent a lot of time with Cal recently, and can sympathise with his situation. Let’s say, we now have a much better understanding of each other!”

A return to WSB with Yamaha began badly, but by Monza he’d had four podiums in a row, fighting for wins back in world superbikes.

“It was a hand/wrist injury that had held me back, but by Monza I was less than 30-points off the leader and in contention for the title. Then somebody knocked me off, and Leon Camier’s foot-peg whacked me in the neck. What I’ve learned since then is that with broken bones you can still race, but if it’s your hand or wrist, you simply can’t. This year I was testing some tyres for Pirelli when I crashed my BMW. With this wrist problem it’s taken months for me to realise that I can’t do this anymore. Well, I can, I could finish top-ten for another decade, easily, but I just don’t want to. If I can’t fight for the win, I won’t just take a pay-cheque, it’s unfair on everyone, from the teams to the fans. Oddly, I’ve no regrets, and of course I plan to perhaps further my music career – but in the same vein, only if I’m good enough.” James’ drive to succeed has culminated in this decision, and this honesty is counter to the reaction of many lesser riders – and should be saluted.

There you go, JT’s career in a nutshell, the most successful British rider for a generation. Thanks for the memories, mate.