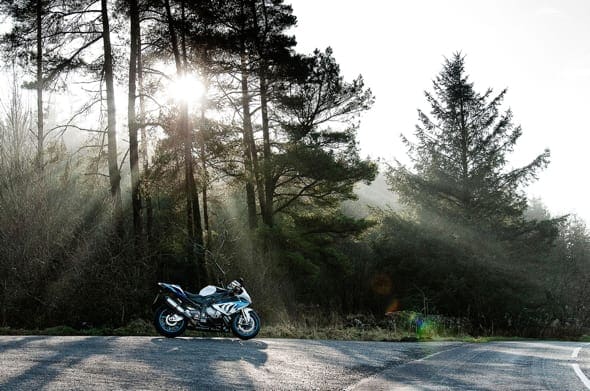 It’s a picture of an object. An object that’s not moving. The point is to make you look at that object for its own sake, rather than for what it’s being used for, or what someone’s doing with it. Or to it.

Static shots can fill pages and even double-pages so we have to make them worth looking at, and other than the shallow bike-porn aspect the challenge is to hint at what the situation is. There’s a couple of points here.

The Grouptest can take many formats, and one of them is New Arrival vs Old Lags. I thought I heard Simon say the CBR is the most updated of the supersports for oh-thirteen (he heard wrong – Rootsy), so after the traditional group shot was done I pulled it forward so that I could do a longer shot through the fence, with the other bikes a bit blurry in the background. Pretty simple idea and it only took a minute, so a double win here.

I quite like this shot as it combines two ideas that don’t often go together. The first is the ain’t-it-pretty landscape standard misty sun through trees, the other is the less obvious narrative pointers. The bike is tilted down toward the road slightly to imply where it’s going to go, and included in the corner are the curved white lines to show what it’s going to do when it gets there. Also the bike is pointing slightly away from us – it’s going to go Up The Road – which is always a sign that a picture isn’t just a “look at this object” image.

So even though nothing’s moving, you can still give the impression there’s something going on, illustrate a point, or lead the viewer towards what’s about to happen – the static shot can always move the viewer forward or backward in time.