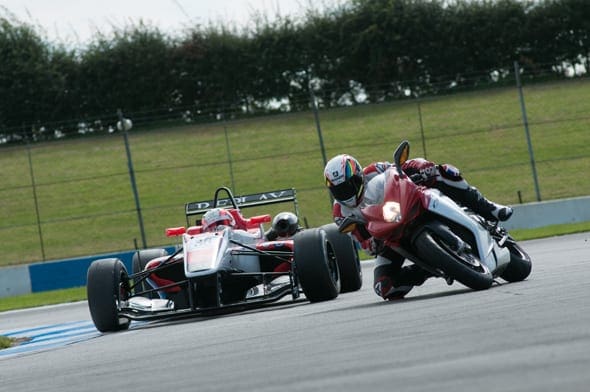 At Donington on Sunday, Robby Rolfo bagged MV Agusta’s first world championship podium for 37 years onboard his ParkinGo F3. Last year, also at Donny, we raced a bog-stock, road-going MV F3 against a British F3 race car worth half a million pounds. Why? Because we can!

The MV weighs in at 173kg. No, that’s not a kerb figure. That’s harry boners, and gives away at least 10kg over some of its 600cc rivals. The good news is the F3 is the most powerful ‘600’ ever produced, churning out a whopping 115bhp.  The F3 car tips in at 550kg, including the driver and any ballast. The Mercedes Benz motor produces around 210bhp. These figures give us 381bhp per ton for the car. The MV busts the charts with almost double that – 664bhp per ton – but we didn’t have much of that cheating substance: downforce.

Here’s a corner-by-corner insight into how and where Alex Lynn (future F1 driver) and his Fortec Motorsport thingy gained an advantage over Al and the bike, apart from not falling for the burger van trick. Fatty managed a 1:42.61 lap of Donny, while Alex clocked an impressive 1:23.08s…

Redgate
The bike gives away nearly 20mph to the car at Redgate. Braking at the pit lane exit, I physically couldn’t have hit the anchors any later, running wide on several occasions before the hot lap. The MV’s stability was good and the engine braking control was working with me here. The Brembos are mega. Meanwhile, Alex and the car dab the brakes at the end of the start/finish straight, drop a gear, and drop the frickin’ hammer.

Craner Curves
The car is flat-out all the way down the hill. I’m already a member of the Craner Club and didn’t want another badge. Some road bikes prove tricky in change of direction, with a total inability to handle the G-forces. The MV was sweet, although a lingering doubt as to whether the shift lever would touchdown and knock it down the ‘box was always there.

Old Hairpin
Still in top cog, Alex stamps on the brakes to assist with steering around the cambered-on-entry, off-cambered-on-exit Old Hairpin. Carrying an insane 40mph more, the car gains massively as the bike’s front-end is truly tested. It’s on the exit where the MV’s shock wasn’t behaving as well as it should be. Luckily, the TC was tidying up the squat and lack of feel. Up the hill towards Mcleans, the MV’s triple pulls hard and gains a little time, until another corner. An iffy constant throttle response definitely lost time here, too.

Coppice
The blind entry, again, favours the car, which has an apex speed of an extra 25mph. Despite the soft set-up, the MV was very stable over the rise and I was able to turn-in exactly when needed – crucial for good drive onto the back straight. Acceleration was sacrificed through lack of feel. For the first time since exiting Redgate, the car leaves top gear. Alex and his cheating four-wheeled combo just sneaks the top speed before dabbing the brakes and downshifting one gear for The Esses. The MV loses a mass of time here, braking from 141mph to a sedate second gear parade through the chicane.

The slowest section of the circuit is fairly even when you look at apex speeds – the difference being the car is at minimum speed for a minuscule amount of time, braking much later and gassing much earlier.