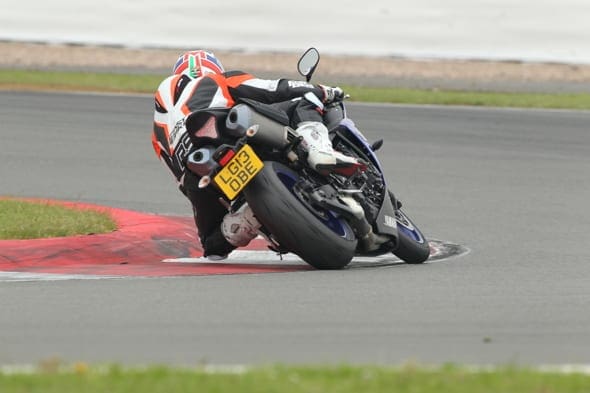 The new Dunlop D212 GP Pro is the latest track rubber from our chums in Brum, the firm that professes to to abide by the principles of ‘Race to Road’. Alastair went to Albacete on the tyre’s exclusive launch, but back in Blighty Rootsy was invited to try the D212 around Silverstone’s amazing GP track.

But before the treat of a track began, the presentation began. It was a small price to pay given the rest of the day’s activities, and emphasised what the new tyre is all about. Given Dunlop’s involvement in racing (Moto2, Moto3, Road Racing, AMA, Endurance…the list goes on), the firm is keen to put as much of its race derived technology into the product that we can buy. So we’re talking about racing profiles, compound technologies, multi-tread constructions and elements such as NTEC construction. With the aim being to take a product from race to road in a year, the D212 is the tyre that John McGuinness won the 2012 Superstock TT on.

Pitched as an almost pure track product, the D212 is essentially Dunlop’s slick product with a tread. It uses MultiTread technology so the tyre is tuned to suit grip to lean angle. There’s also Dunlop’s Jointless Belt construction that helps to stop the tyre from growing and reduces unsprung mass. NTEC allows you to run super-low tyre pressures to increase the tyre’s contact patch while retaining cornering stability and the new Jointless Tread uses strip winding tech to precisely position the right compound at the right place – using this technology allows each tyre to be just 40grams within each tyre.

A new profile is a big change from the outgoing D211. It’s more bulbous, less pointy, and this improves stability under braking and improves turn-in times. A claimed 20 per cent upping of the camber stiffness measure improves high speed stability.  Thanks to the Jointless Tread Technology (JTT) there are essentially four zones of compound as the compounds are interlinked on top of each other. Compound choice is selected effectively decided off a chart. You follow your finger across the chart against ambient temperature, track severity and application and you come up with the compound to suit. You get two choices of rear size, a 190 (for 600s and 1000s) and a 200 (just really for the big 1000s), with just the one option at front – a 120/17ZR16. Dunlop recommend to use tyre warmers before any use.

So with all that out of the way, what were they like around Silverstone on my longterm Yamaha R1? Well, after sorting the very squidgy suspension, the answer is a resounding ‘great’. Scrub in and warm up (the first two sessions were on a cold front) were a breeze, with three corners being enough to settle into warm-up mode and then two laps of the huge circuit all you need to then get stuck in. The D212 GP Pro cruelly exposed the soft suspension of the bike, so after another session to confirm this, I attacked the Yamaha with a screwdriver just to find some more support. We got there eventually, and found a tyre that performed impeccably on track. The front steered very quickly, only picking up a bump onto the Hanger Straight and kicking the front off its otherwise stable line. It gripped to the pegs, and still had more to go, such was its insatiable appetite to corner. Direction changes were hampered by the Yamaha’s size – other bikes revelled in Silverstone’s fantastic Complex – but it held a line obediently up to the apex, when the rear started to take over.

With the traction control set on level two, all the rear had to do was to work up to this point. And given the very limited intervention form the electronics, the inherent grip available was staggering. It’s just one of those tyres that you can really take liberties on, and the only problems you get are with suspension set up, with the rear squatting and the front rebound not working hard enough to steer. It was a tyre that was way better than me, no matter how hard I tried, and one that I’d be happy tonking round any track on. After seven sessions the performance hadn’t dropped off one jot, and they’re still on the bike doing road duty at the minute with no frights or scares on the daily commute.

Alastair went out abroad and came back and reported below (click image to bring up the pdf); And if you want any more information your best bet is to go and visit the Dunlop website.