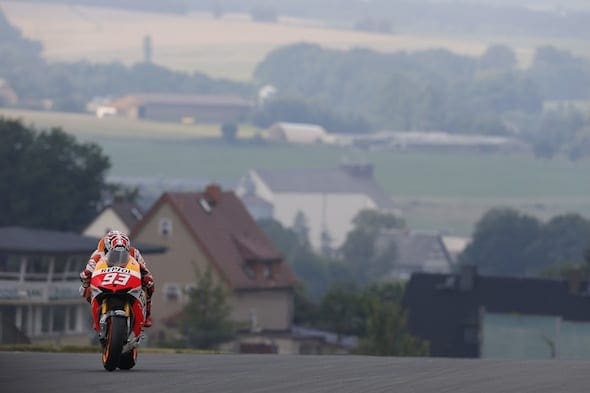 Marc Marquez – What else can be said about the kid? He’s unreal. After passing Rossi, Marquez cleared off and was never really in any danger, shrugging off a broken toe and finger from an Assen stack. Could he really win the championship in his rookie year?

Cal Crutchlow – Cal kept the race interesting right until the last lap, despite two massive crashes during practice – check out his twitter for pics. If it weren’t for getting stuck behind Bradl and Rossi, he might have been able to reel in Marquez.

Jordi Torres – A maiden GP win in the Moto2 class made Jordi Torres the happiest man in the paddock. The Aspar rider did us Brits a massive favour!

Aleix Espargaro – After qualifying in 5th, the second-tier Espargaro brother eventually finished in 8th, just behind the full-factory prototype of Dovizioso. His race time would have put him on last year’s podium.

Jorge Lorenzo – Perhaps Jorge’s team should have displayed ‘mantequilla’ on his pit board during the first free practice session, considering he was 0.3s quicker than anyone else – with a broken collarbone. Another trademark trip to the moon, and the corresponding landing, bent the titanium plate that was fitted just a few weeks ago and required more surgery. Looks like J-Lo may race at Laguna Seca this weekend.

Dani Pedorsa – Dani didn’t take advantage of J-Lo’s mistake at the Assen GP and certainly didn’t in Germany. A massive cold-tyre highside in practice fractured his already weak collarbone and knocked his bonce about. But it wasn’t the injuries that stopped Pedrosa racing – it was the doctor’s dose of painkillers that gave him blurry vision, apparently.

Scott Redding – Scott struggled in the race with tyre problems (it looked like someone had been at it with a hammer and chisel) but still managed to come away with a 23 point lead in the Moto2 championship. Looks like he’ll be on a Gresini Honda next year

The Ducatis – While Iannone missed the race due to a shoulder dislocation, the factory pairing of Dovi and Hayden were battling with CRT bikes. After a showing a little promise during the early part of the season, it’s not looking peachy for the Bologna factory.

A podium is usually a good thing in racing but with J-Lo and Pedrosa out of the equation, and being so far off the pace of Cal and Marquez, Rossi struggled with set-up issues.