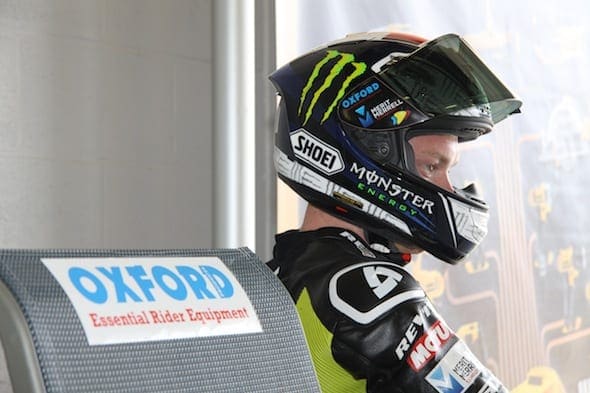 On Friday 5th of July, we trekked up to Silverstone for the launch of a new range of power tools from DeWalt at the incredible Wing facility. The only thing distracting you from the massive quarter mile building were the yellow and black flags and power tool display area. And,  of course, an area coned off for the drill-powered motorcycle – just awesome.

This was a day for DeWalt to entertain competition winners and clients, and reward all with time with one of their sponsored riders – Tech 3 rider, Bradley Smith. We got an invite for a 10-minute stint with Bradley, and with the rest of the Fast Bikes team pulling wheelies somewhere, I put my hand up for the job. It had been a while since I interviewed a celeb. Sure, I snapped away as Al put Jorge Lorenzo through his paces, and I have also interviewed Naseem Hammed in a previous life, which had been a particularly awful experience. So a 22 year old MotoGP star, fresh from a 9th at Assen, the youngest British rider of all time to reach 100 Grand Prix starts and the youngest Brit to have a full time ride in MotoGP class – got to admit it, I was looking forward to this one!

I was pretty well researched but it immediately occurred to me – which hand did he damage again?! Fortunately, my right hand met his and we were away. I kicked off asking about the damaged finger that he may never straighten, the one our Parrish reckons will be “good for drinking tea”. With the iPhone recording, Bradley and I chatted through his season, his past, expectations, and more. He is instantly likeable, with an attitude, spirit and passion that has got him on the biggest stage of motorcycle sport. There is no arrogance in him whatsoever, more a quiet confidence, and his response to what advice he would give fellow Brit Scott Redding on the step up to MotoGP was a perfect example of this.  “It would be disrespectful for me to advise anyone leading a World Championship”.

With the phenomenal run of Crutchlow’s results, you could almost miss how well Bradley is doing in his rookie year. His first three races were DNF, 12th 10th but since then he has been in the top ten. A 6th in Catalunya was matched a week after we met over in Germany and that is his target at Silverstone.

Bradley is media savvy, having been in front of the camera and journalists since he was 14 starting from his MX days. I didn’t try to trip him up but had to ask the question which rider he most respected. “Casey Stoner. He was the guy that made us all look stupid”. Once the iPhone was turned off we continued to chat until the inevitable PR intrusion. In that time though, we talked about the magazines, how he likes to see what is being written about him. How his love of bikes and speed means he could never ride lawfully on the road and then amazed me with an in-depth description of why the new launch of brushless power drills from DeWalt last so long. He wasn’t practicing for anything, he was just naturally interested in his sponsor’s product and through talking knowledgably about them. I never thought it was forced, contracted, or contrived. Just natural enthusiasm.

I asked if he would mind me hanging around, taking pictures later as he went out to give three lucky comp winners pillion rides around Silverstone. That was fine, though he was nervous giving rides on the R1 – he had never done pillion rides before! Fast Bikes subscriber and comp winner, Woody, was buzzing after his ride. The day continued with presentations, introductions and I had a further snoop around Silverstone’s Wing. Take the tour if you get the opportunity – you get to see all of the back room, get on the podium and just see how vast the place is.

When I entered the pit garage, Bradley’s area was cordoned off but only as a busy track day was running. As word spread, mothers and children stuck there heads round and Bradley signed autographs, had photos taken and was a PR dream. His luxurious trackday table was complete with Tissot Watch, Monster Energy drinks, Shoei Helmets and kit bags, Revit! gear and Oxford Products chairs. All sponsors beautifully acknowledged as part of his working day.

I grabbed another quick chat with him, eyeing the MotoGP13 video game set up. I understood that racers familiarised themselves with new tracks via games, Bradley? “No not really, they have not really been all that good since the Namco days, they are not all that realistic”. However once on the new incarnation he was visibly impressed, “actually they have got a lot of this right”. Bradley chose himself on the game, Silverstone circuit and bemoaned his placing at the back of the grid. A number of film crews had circled us by then and I snapped away, got my image and left them to it, just as Bradley playing as Bradley crashed.

So the end of the day came and he was preparing to get off to Germany. “The teams are already on their way”, he explained – so how do you get there then Bradley, private jet? “No, we fly Easyjet or Ryanair. We have to save money where we can”. Yep, that’s pretty grounded I say and all around me people were saying the same, he is one of the best professionals in the business, and from what I have seen I think they are absolutely right.

You’ll get to read the full interview in the mag very soon!