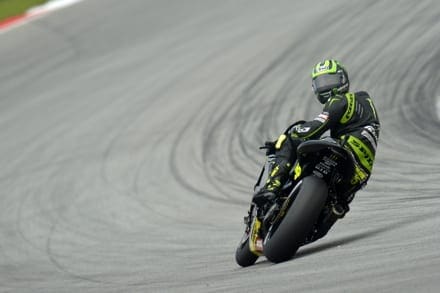 Here’s the official statement from Ducati to confirm what we all suspected – Cal Crutchlow is off to the Italian factory in 2014 on a two year deal.

Ducati has reached an agreement with Cal Crutchlow that will have the Briton campaigning the 2014 and 2015 MotoGP race seasons with the Ducati Team. Crutchlow will race alongside Andrea Dovizioso. The British rider and the Italian, who were team-mates in 2012, will work on developing the Desmosedici and growing Ducati’s MotoGP project.
The 2009 World Supersport champion and 2011 MotoGP Rookie of the Year, Crutchlow is presently enjoying his strongest GP season to date, sitting fifth in the championship points standings. He has posted four podium finishes in the first nine races, and he earned his first MotoGP pole position at the Dutch TT.
The end of the 2013 season will also mark the completion of Nicky Hayden’s five-year professional relationship with the Ducati Team. Ducati would like to thank Nicky for his contributions during that time, and everyone on the team and at Ducati Corse looks forward to giving him and Andrea their full support over the second half of the 2013 season.
Cal Crutchlow
Race number: 35
Age: 27 (born in Coventry, UK, on 29 October 1985)
Height: 1.68 metres (5’6”)
Weight: 66.68 kg (147 lbs.)
GP starts: 43 (all in MotoGP class)
First GP: Qatar GP, 2011 (MotoGP)
GP podiums: 6 (all in MotoGP class)
First GP Pole: Dutch TT, 2013 (MotoGP)
World SBK starts: 30
World SBK wins: 3
World SBK podiums: 11
World SBK poles: 6
World Supersport starts: 17
World Supersport titles: 1
World Supersport wins: 5
World Supersport podiums: 10
World Supersport poles: 10
Notable Achievements:
• 2011: MotoGP Rookie of the Year (Tech3 Yamaha)
• 2009: Supersport World Champion (Yamaha)
• 2006: British Supersport Champion
• 2001: Aprilia RS 125 Challenge Champion
Article continues below...