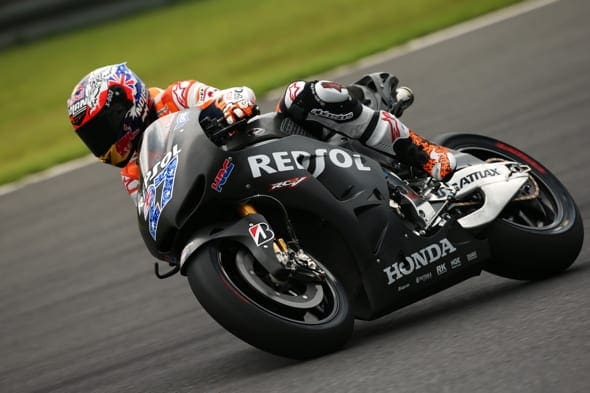 Casey Stoner has been back on a Honda MotoGP bike, at Motegi, developing the 2014 machine for his former employer. Although rain stopped much of the play, it’s clear that having Stoner as a test pilot can reap rich rewards for Honda.

This is the first time Stoner has been back on a bike in getting on for a year, and we reckon the fact he’s been tempted out of retirement to do this hints at a possible wildcard return at Phillip Island. It’s a long way to get to that conclusion, but it’s not beyond all

Here’s what he had to say. “It was good to get back on the bike, if only for a few laps! We only managed to get one run in before the rain arrived which was a little disappointing,” said Stoner.

“It was really nice to get that first run, it’s been nine months since I’ve been on a bike and it’s going to take me some time to get used to everything again! The bike and the track felt good and I hope that we can get some better testing in tomorrow with some dry track time and run some more laps.”