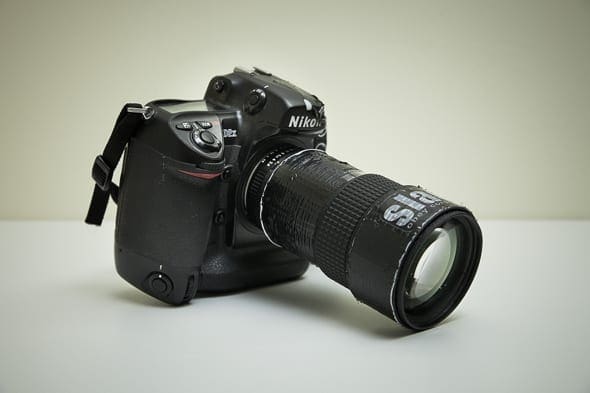 This here is my slightly worse-for-wear Nikon D2x, with my Nikon 180mm f2.8 AF-D attached to it. If you were wondering what items one really needs to take brilliant motorcycle action images, these, according to me, are they. OK so a battered old obsolete slow heavy camera body is going to be a difficult sell, but if none of the below do it for you, feel free to substitute a D90 or D300 and put up with a slightly lower success rate.

• it’s literally a handful. If you’ve got man’s hands and are going to be using it all day, a camera that doesn’t scrunch your fingers into claws is a plus.

• just the right amount of shutter lag. I didn’t like how the D3’s release felt like it went off even before I’d pressed the button.

• reliable autofocus performance. It doesn’t do all the clever stuff they have now, but for the specific purpose of motorcycle action, it’s almost perfect.

While the D2x is a bit hard to justify, I’ll stand by the 180mm Nikon all day long. The only luck I ever had owning telephoto zooms was bad, so when airport baggage handlers smashed my 80-200mm f2.8 AF-S into two pieces, I hired one of these, then bought my own, and have never looked back.

It’s small, light, reasonably-priced to buy used, it lets in loads of light, the resolution of fine detail is amazing, and on the D2x and other crop-sensor cameras gives pretty good reach on your subject. But the best bit about this lens is that it is all of those things. I’ve had this one for fifteen years and because it’s made of metal and is all mechanical (which unfortunately means it doesn’t work with lower-end bodies), I’ll probably still be using it another fifteen years from now.

If you’re looking for the extra level of nerdery, it’s this: it has straight blades for the aperture, so highlights on shiny bodywork and helmets make stars (which I like) but also means that out-of-focus areas can appear coarse rather than creamy smooth (up to you). Oddly, this pic seems to show a creamy-smooth background, but that’s because the fast panning movement made it very plain to start with.

Occasionally I get asked about how to take pictures that are a bit better quality in some way or other. When I first started twenty years ago, the simple answer was that until you shoot some transparency film, you’ll never know how good you are. Over the years the answer became more complicated as the crazy cost of new technology became a factor, but it’s simple again now. Until you shoot with a decent lens that lets in lots of light, you will never know how technically good a picture you can take.