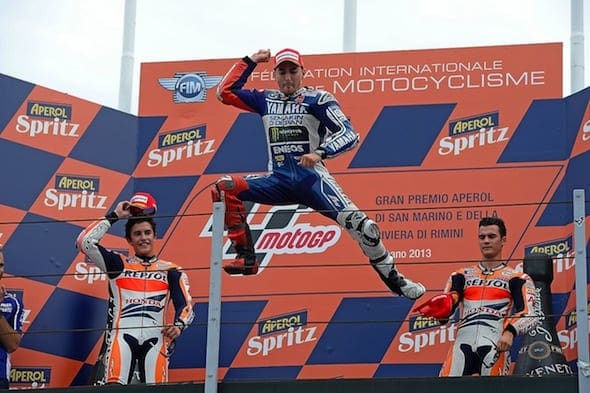 This weekend we were treated to MotoGP at Misano, while Istanbul hosted World Superbikes – although the racing wasn’t exactly edge-of-the-seat stuff. The latest paddock rumours included Alex Lowes signing for PBM MotoGP (partnering M-Lav) and Eugene Laverty joining Nicky Hayden on Aspar Aprilias in 2014. That’ll be six in the top class – Brit-fest, baby!

Jorge Lorenzo – Another dominant display from J-Lo. Just when we thought Marquez was in the groove and heading for global dominance, the reigning world champ dug deep and found something in warm-up to claim his second consecutive victory – and all of his 28 laps were within half a second. Still needs MM93 to make a mistake, though.

Pol Espargaro – After claiming Moto2 pole, Pol took advantage of an iffy weekend for Scott Redding. Nakagami set his usual blazing pace at the start but faded to let Espargaro claw back a few championship points.

Eugene Laverty – Norge took two wins and maximum points in Turkey to re-establish himself in the hunt for the championship, coming from behind in both races to snatch victory from Tom Sykes. The top four are separated by just over 30 points, with two rounds remaining!

Valentino Rossi – After a promising qualifying and a front-row start, The Doctor got well and truly annihilated by the yoofs at Misano as he finished 15 seconds off Lorenzo. Apparently he’s having difficulty stopping the bike, and the fact his M1 has to run so much leaner because of his weight.

Ducati – for the first time ever, there were no Ducatis on a World Superbike grid after all three Panigale riders spanked themselves during practice. And MotoGP wasn’t much better either. Lets hope they can get a decent bike under Mr Crutchlow for next season…

Leon Camier – After that horrible crash in Germany a few weeks ago, Leon Camier joined an extensive list of injured riders who went down the road on Friday in Turkey. Leon went under the knife to repair a badly broken foot. Get well soon!