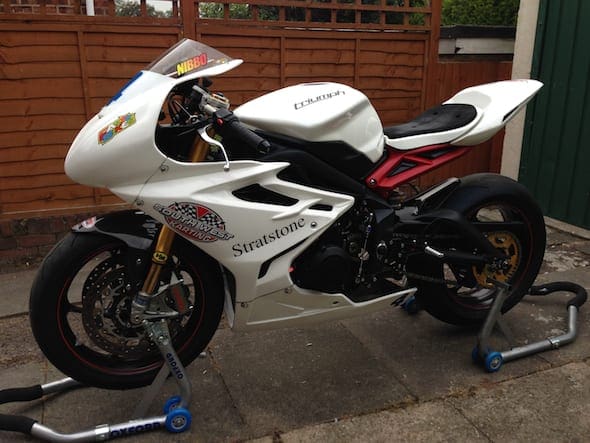 FB regulars should know of my recent injuries and tales of attempting to eat a Fireblade, which has completely screwed the rest of the season. A broken hand, foot, dislocated shoulder, and all the soft tissue complications that go with it, mean I’ve missed a chunk of the Triumph Triple Challenge – just as I was gelling with the 675R and closing the year with my favourite circuits.

It seemed an utter waste of wheels to be sat in the FB garage, so went about finding a replacement rider for the Fast Bikes/Stratstone Trumpy – very much like the Yonny Hernandez for Ben Spies saga, or Luca Scassa for Karel Abraham swap, just on a much bigger scale. After perusing the racing paddocks we had a sizable list of candidates ranging from young spunkers (who would have probably ended up stacking it beyond recognition) to old-time VIPs. In the end, we couldn’t settle for anything but the best.

Remember Nibbo and his adventures at the TT? Michael Niblett was our brave little privateer battling the big-budget factory teams. He’s had an eventful career, most prominent for his R6 Cup escapades and crashing loads. After this year’s TT, Nibbo was going to retire. But after waving a 675R in front of his gut, his retirement soon became shorter than Freddie Spencer’s in 1998.

While all the attention is on the BSB boys and girls as they head to Silverstone for The Showdown, the Triumph Triple Challenge is coming to an enthralling finale. Chrissy Rouse has been the standout kid this season. With 100 points up for grabs, he leads Freddy Pett by 57 points heading into the last few rounds and remains favourite for the title. He’s an amazing talent and a good kid with it, so watch this space.

Keep up with Nibbo’s exploits at Silverstone BSB next weekend…