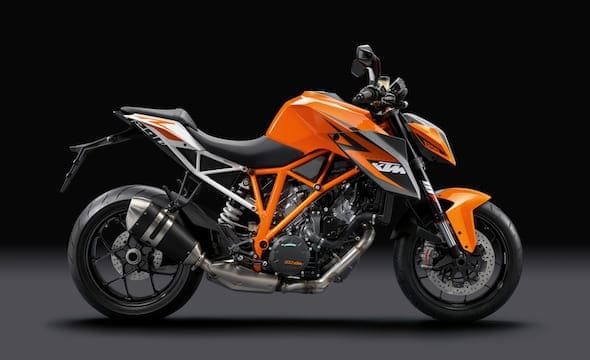 After an age of KTM and Jeremy McWilliams teasing us with the prototype 1290 Super Duke R, the production version of ‘The Beast’ has broken cover today. Of course, it was never going to be as rowdy as the prototype due to emission laws and other jurisdictions, so the open pipes, supermoto wheels and gas-charged forks have made way for everyday items. And the dreaded number plate hanger has made an appearance.

Packing big horsepower, a tight chassis, and being a KTM, it’s going to be absolutely bonkers. So far, we know it has an explosive 1290cc RC8-derived motor kicking out 180bhp, controlled by ride-by-wire and traction control. The single-sided swingarm and WP suspension support the steel-trellis frame, and the 1290 will be stopped by Brembo M50 Monoblocs and a Bosch ABS system.