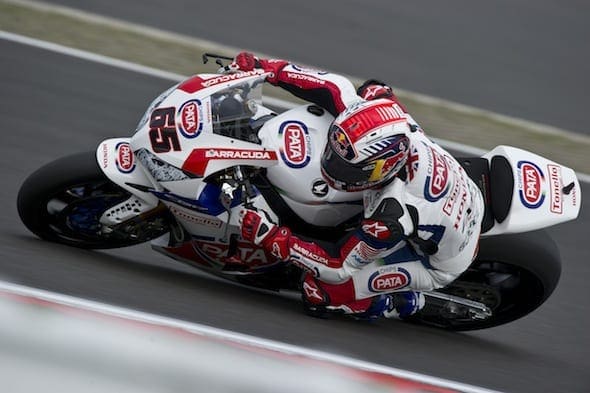 Pata Honda World Superbike team has announced that it will retain the services of its current line-up for 2014. A little surprisingly, Jonathan Rea will remain with the team for a seventh year and joins Leon Haslam in the snack-powered team. Rumours of an all-new ‘Blade may have sweetened the deal after J-Rea couldn’t get a MotoGP ride.

Both riders have endured a tough season with torrid injuries. Rea, fresh from welcoming his first sprog into the world, is currently recuperating from a badly broken and is optimistic about the possibility of riding his Honda again before then end of the year. Meanwhile, Haslam has been affected by a broken leg he sustained at Assen in April.

Jonathan Rea – “It’s been a big decision that I’ve thought long and hard about because there were some other options to consider. However, at the end of the day it was an easy choice because of the faith and respect that I have for the team that I’ve been with for six years and the company that I have been with my entire career. I know how hard the guys work to make the Honda competitive and I know that we have the potential to fight again for more podiums and race wins and the championship next season. Those podiums and wins are what motivate all of us and that’s why I know that everyone will pull out the stops over the winter again to make them happen. We will go into the testing programme in a much better position than we were in 12 months ago because we’ve worked so hard to get the new electronics package to work this season. I am as motivated as ever and really looking forward to riding my bike again.”

Leon Haslam – “I’m very happy to have another go at it, really! This season has been pretty non-existent with the injury and the big learning curve we’ve had with the new electronics. So I’m excited to get back to full fitness and to have good go with the bike and see if we can turn the potential into success. We’ve made some really good steps recently but that’s been combined with some bad luck this year. Hopefully, that’s all out of the way now and we can keep making progress in the last few races and over winter testing. The Haslam link to Honda has been strong for many years and it was fantastic to win the Suzuka 8-hour this year. Hopefully we can go back and defend that next year, and I can’t wait to go into the next World Superbike season with the same bike, the same guys and have a proper go at it.”