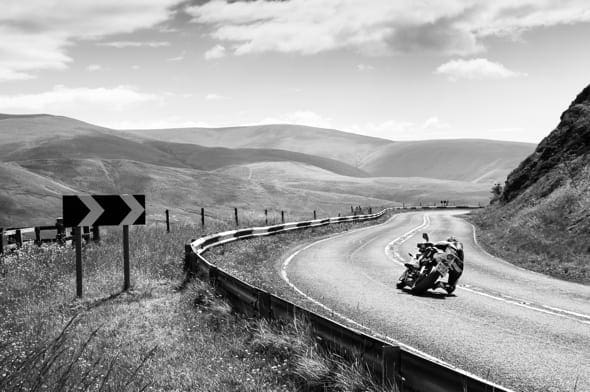 There are any number of ways to dress up why anyone bothers doing any specific thing. Once you get past “for money” we’re into the wishy-washy realm of motivation, and after all, most people try harder at most things than the dirty dollar value really warrants.

There are lots of things I like about this pic from our exhaustive tour of Scotch Land last month. As soon as we set off, Simon pointed out that I wasn’t to worry about how small in the frame the bike might end up, which sounds like it makes things much easier for me but really makes it equally more difficult in the opposite direction. Technically, yes it is all much easier, the difficulty comes from finding something worthwhile to fill the rest of the frame with. Fortunately most of Scotland takes care of a lot of that.

Here, the bike-and-rider are really quite small in the frame, but they’re set against a plain area of tarmac so they really stand out. It’s quite a rear-biased angle to shoot a bike from but it still works because the bodywork defines the front of the bike, and Simon isn’t hiding much of the rest of the bike as can sometimes happen at this angle.

I really like the repetition of the chevron boards, and the coincidence that the bike is level with the larger one and directly below the distant one. They combine to fast-forward the viewer through what’s happening now to what’s coming next. Part of the point of it all is to inspire the viewer to do the same so some of the picture’s success rides on how well – or if at all – it can do this, and putting you in the place of the rider can help a lot.

The angle of the sun here really shows up the textures so I’ve worked it up in black and white. I think the tones work pretty well; I like how the sky graded itself to look quite natural, the far hills looking like enormous cushions, and that the contrast in the whole image diminishes with distance so it looks like miles of space. To make it all look appealing is most of the rest of the measure of a picture’s success.

The final finishing touches of the name on the leathers, and the barrier and double white lines both following the same kink in the road as if shifted by some geological movement, are the small rewards for paying extra attention. But really all these words are just a long-winded way of saying what we’re really trying to do in any one moment, which is to get the instant hit. The satisfaction of threading all the right points together on a join-the-dots bend sequence, and the split instant of success when the scene re-appears in the viewfinder revealing that the bit of bike that you targeted with a focus point is still exactly where you aimed.

But then that’s the magic of photography that comes from making decisions in one moment, that you undertake in an instant – and can then review for ever. If you can be bothered.