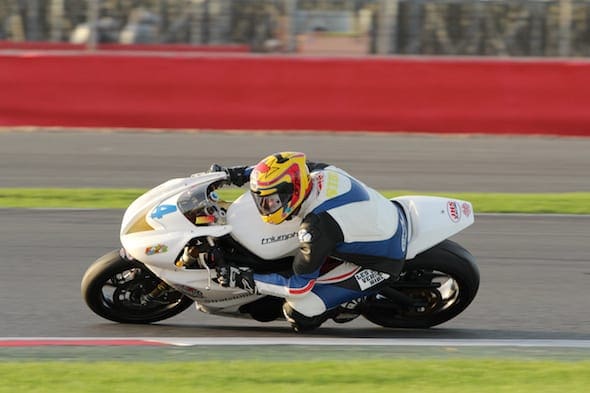 Still injured, I handed the Fast Bikes/Stratstone Triumph 675R over to Michael Niblett for the penultimate round of the Triumph Triple Challenge at Silvertsone. Nibbo hadn’t ridden a bike since competing at the Isle of Man TT races in June, so was fairly rusty and this year’s Triumph Triple Challenge is brimming with young, fast lunatics that don’t care if they return home on Monday morning. Excuses sorted already.

Heading into Silverstone, championship leader and class act of 2013, Chrissy Rouse, had a 57-point lead over Freddy Pett. With 100 points up for grabs over the final two rounds, the math was simple: leave Northamptonshire with a championship lead greater than 50 points, but nothing is ever simple.

Free practice was a wet session and was headed by Phil Atkinson, with most of the usual suspects in and around the top five. Nibbo ended up 22nd out of a 35-rider field, hamstrung by having to downchange to get up the hills. “I had never ridden the Silverstone GP circuit before, or ridden Fatty’s bike. I did the National circuit back in 2004 but didn’t feel comfortable with bike or circuit today.”

Qualifying wasn’t much better for Nibbo. “It was dry but I still had no idea where I was going and the bike refused to hold the lines I wanted.  It was very disappointing to end 26th and knew it was partly the bike, but mostly me.” Phil Atkinson again headed the field from Freddy Pett. Rouse was surprisingly languishing down in 10th, his worst qualifying of the year.

“For the first race, I drastically changed the set-up,” explained Nibbo. “We made it much softer, and I walked the track the night before to get a better idea of lines. I got off the line ok but narrowly avoided getting torpedoed in turn one and the only guy behind me was Murray Hambro. I fought through and got embroiled in a scrap with three other riders who I eventually got past.  I was half pleased with the race and the circuit seemed to click.” Nibbo shaved four seconds from his qualifying time but could only manage 23rd. Meanwhile, back at the sharp end, Chrissy Rouse won the manically fought race by a tenth of a second from Spanish rider, Aleix Aulestia.

Sunday’s feature race saw Nibbo up for the fight. “I was determined to get into the top-15 and I focused on getting a good start, which I made an ok job of. The first lap was carnage with people lobbing it everywhere.  Once things settled down I ended up in a long race battle with Oliver Hill. I had a go at making a pass on the Hanger straight on the last lap. We were banging elbows but I didn’t make it stick. Overall, I’m dead happy.” Nibbo ended the crash-fest in 14th and collected two points for his efforts, while Chrissy Rouse again left it late but won the race. Rouse was crowned 2013 TTC champion and bags a well deserved Supersport ride in 2014. Meanwhile, Nibbo pinched a paper crown from Burger King.

Big thanks to Nibbo for bringing her home in one piece. The last round of the TTC is next weekend at Brands Hatch and I’ll be back in the 675R’s saddle. We’ve got a good set-up from last time we were there so I’m aiming for a top-5. We’ll be in the TTC awning, so come and say hello…