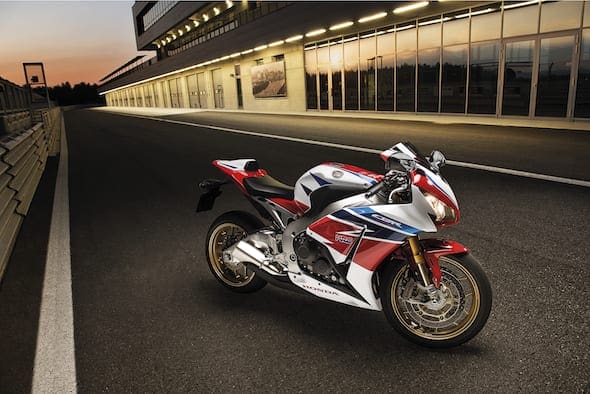 On its 21st birthday, Honda’s Fireblade gets some very minor upgrades for 2014 but still no sign of the much-awaited V4 motor. While the crux of the bike remains the same, the 999cc lump gets some ‘extensive’ cylinder head work to improve gas flow, and equates to 2-3bhp at peak and a bulkier midrange. The valve seats have also been redesigned: pinched from Ten Kate’s work in WSB. Also refined is Honda’s Programmed Dual Sequential Fuel Injection system. There’s still no HRC traction control loveliness for 2014 but the Fireblade has always bragged sublime mechanical grip, and the remapping should further enhance this.

Taking guidance from ‘Blade owners, the riding position has also been changed. The pegs are 10mm further back and the ‘bars are wider, 1 degree lower and 5 degrees further forward for a more aggressive stance.

The big news for sportsbike nuts is the Fireblade SP version. The track-focused ‘Blade features Öhlins suspension (NIX30 fork and TTX36 shock), Brembo Monoblocs and a single seat. The engine gets the same cylinder head upgrades as the standard ‘Blade, plus some blueprinted internals (hand-picked pistons and rods from the factory) – expect 5-10bhp from this alone.

The twin-spar frame, although based on the standard model, gets modifications to suit the Öhlins suspension. Changes to rigidity around the shock mount have been designed to give more flex and feel. The Öhlins fork has an outer diameter of 55mm, which is 1mm more than the Showa kit, so there is a revised top and bottom yoke. The top yoke uses CNC machining and improves rigidity.

Thanks to the single-seat, a new lighter rear subframe will be used on the SP model. And to suit the SP’s more track-focused attitude, Pirelli Supercorsa SP rubber is fitted. There are also racier upgrades to the C-ABS.

All in all, not a substantial amount to get excited about but the changes to the SP should mean a leaner, meaner Fireblade and faster lap times. We look forward to thrashing the pair at the press launch in December…