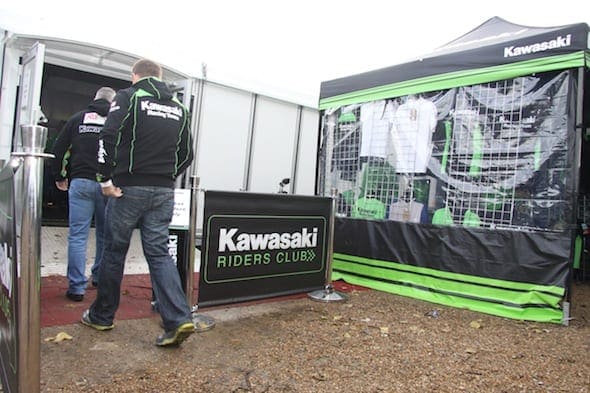 The 20th October was always going to be a big day in 2013’s racing calendar and was the natural time for Kawasaki to put on their season spectacular for members of the Kawasaki Riders Club and their families and friends. The 8.30am opening of hospitality was always going to be a push for me. I can get to Brands in about two hours from home without adding caffeine and nicotine to my fuel stops, but this time the additives were very necessary, not only to energise after a 6am start but also the driving rain that did not really stop all day.

When I did finally get to Brands though I found the exclusive KRC only parking at the entrance, though had to use an overflow as the hard standing was chocker and the field was getting decidedly boggy, even at 9.30am. Having parked up I headed through the gates with my tickets and KRC VIP entry ticket in hand finding the Riders Club Marquee brilliantly positioned right on the Start/Finish straight, overlooking the track with a fabulous view of Clarke Curve.

On entry, signed in wrist banded up and found the party had already started. All of the tables had members sitting at their base for the day, making the most of free tea and coffee warming themselves from the Parade Lap (that I had missed spectacularly) and exclusive KRC Pit Lane Walk. All were now waiting for the Superbike Warm up, all eyes on Mr Byrne and what a day he could have.

Having found a base, dripping across the floor to a coffee and returned to change out of my bike gear, the only thing left to do was head to Kawasaki Merchandise, buy a pair of dry socks and beg for two additional carrier bags – these would come in handy later.

Within the hospitality tent the entertainment never stopped. All of the on track action piped through onto four giant screens which came in very handy, not only for the action you could not see out front, due to the make up of the Brands GP circuit, and when the rain drove so hard you couldn’t see through the window, but also to link direct to Jerez following Tom Sykes progress on the ZX-10R. The jubilation from the Kawasaki fan base was electric as Tom secured the SBK crown, that was championship one all sewn up for the day.

Between races was musical entertainment from Ed Cusick, an array of recognisable tunes loud enough to inspire the musical whilst background enough not to distract the varying conversations leading up to the first Superbike race.

Shakey missed his chance with a slip in race one after Lowes had made contact with Brookes and seemed totally out of contention, so the Riders Club were not treated to his presence at the first rider interview line up. However with Chris Extance –  Team boss at Bournemouth Kawasaki, Chris Walker and Barry Burrell taking questions, there was plenty to take onboard between the races. Not to mention lunch, afternoon tea and bar available for those with the foresight to avoid the rain and not ride up.

Team Green also put on entertainment for the whole contingent with the stunt team commanding the start finish straight. Lee Bowers hammered around in almost impossible conditions and, to his credit binned the bike a couple of times not wanting to restrict his entertainment due to the weather. Once he got to speed, put down the side stand, broke and flipped himself over the handle bars well, it was quite extraordinary and all done right in front of the Riders Club Marquee.

At the end of an exhaustive, emotional action packed day there was Green disappointment at Shakey missing the title. However with everything else going on you could not fail to have enjoyed the day as a paying guest of Kawasaki. The hospitality was awesome and with all of the other benefits that Kawasaki offer its well worth looking at www.kawasakiridersclub.com or visiting the stand at this years Dirt Bike Show / NEC.

So as they opened up the gates from Clarke Curve for KRC members to have exclusive access to join the crowds to celebrate another storming year of BSB, I must have cut a lonely figure. Walking as I was in the opposite direction, my feet in two Kawasaki carrier bags protecting them from my sodden boots and wondering how many times I would drop the fully fuelled Z800 in the boggy mud, all whilst thinking what more I could have got from the day….. and I am still wondering.

I really hope they do the same again next year.