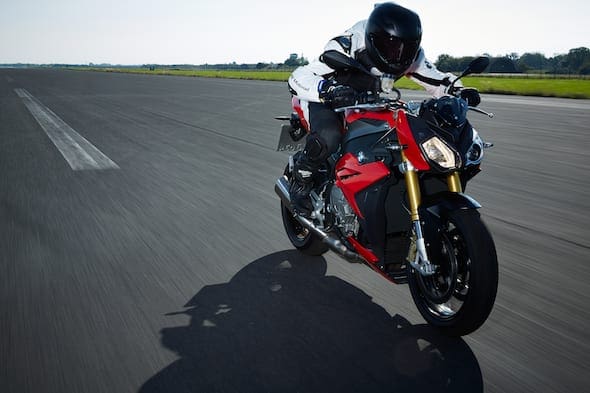 BMW have unveiled their long-awaited S 1000 R naked bike at Eicma. Yes, it does look a lot like an S 1000 RR with the fairings ripped off, but that’s fine by us! BMW have made some concessions towards the naked class though, firstly by retuning the 999cc inline-four engine for more low-down power and midrange. Horsepower is reduced to a still-crazy 160bhp, claimed, and 112Nm of torque. This was achieved by modifying cam profiles, cylinder head ducts and several changes to ride-by-wire throttle management system, now dubbed BMS-X engine management.

Wet weight is very similar to the S 1000 RR, at 207kg, and the bike comes crammed with the usual BMW electronic suite including throttle map modes for rain and road disciplines, Automatic Stability Control (ASC) and of course, ABS.

Chassis-wise it’s as you’d expect, considering the donor bike, which should mean pretty handy. Up front there’s a 46mm fork, adjustable for rebound and compression, while the rear shock remains rebound adjustable only. The relative lack of suspension adjustment is there to try and tempt you towards the DDC (Dynamic Damping Control) optional pack. A similar system to that used on the super-expensive HP4 can be added, which then takes care of lumps and bumps for you. If it’s half as good as the HP4 can manage, it’ll be brilliant and a worthy add-on to consider.

You can also add DTC (Dynamic traction-control) to replace the stock ASC system too, and we don’t need to guess which will the most effective, so something else worth considering. Both those are included in the ‘Sports’ and the ‘Dynamic’ add-on packs.

No price has been announced, though expect it to be over £10k at the very least before add-ons are included.