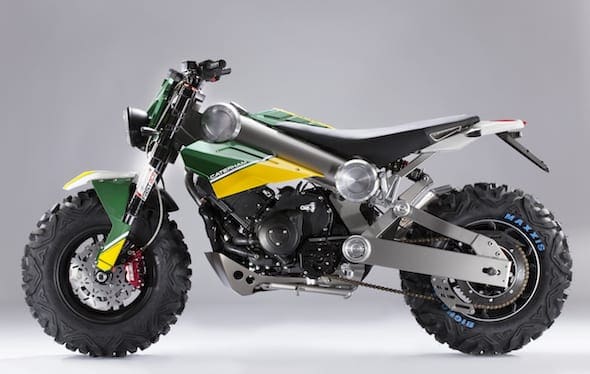 The Caterham Group has today launched its motorcycle division by unveiling three prototypes at the EICMA show in Milan. Caterham Bikes now joins the F1 team and the new Caterham Moto2 team (who’ll be racing in GPs in 2014), among other segments of the brand, in a rapidly growing company owned by businessman and QPR fan, Tony Fernandes and his partner Dato’ Kamarudin Meranun.

The Brutus 750, tagged the SUV of the motorcycle world, joins two electric prototypes: the Classic E-Bike and the Carbon E-Bike, and should be unveiled for launch throughout 2014. The management team includes businessman and ex-GP racer, Andreas Leuthe.

The Brutus converts into a snowmobile in less than 4 hours, while the Classic E-Bike has a range of 40-80km and you don’t need a license to ride it in the EU. Beats a Boris bike…