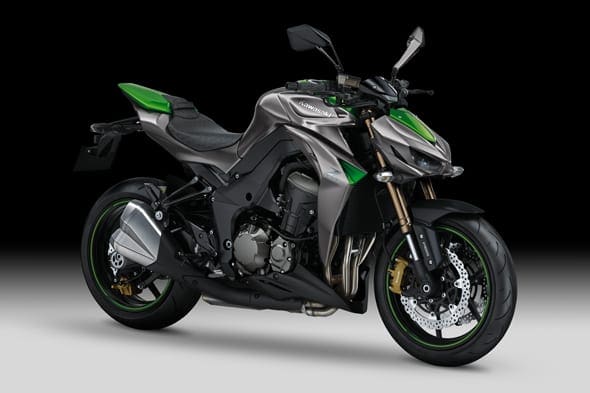 This is the new Z1000, the latest Sugomi design, and aesthetical changes seem to be the order for 2014. While big rumours of a mental ZX-10R engine grew, the truth is the old motor has minor refinement with more power and torque – but no figures have been released.

Revised ECU settings sharpen throttle response and Kawasaki’s engineers have played with cam timing for extra grunt at the bottom. There are also changes to the airbox and exhaust headers. The chassis remains the same, save for the Big Piston Forks that receive some light internal tuning.

For Kawasaki Motors Europe, the latest Z1000 is a significant step in terms of design and brand equity according to Managing Director, Yasushi Kawakami: “Kawasaki is a major player in the Supernaked category and machines such as the Z750 have been European best-sellers in previous seasons. We believe that, with its unique Sugomi design approach, the latest Z1000 will appeal to the growing number of riders who feel an affinity this type of machine as well as acting as a visual benchmark, reflecting much of what makes the Kawasaki brand so distinctive and appealing”.