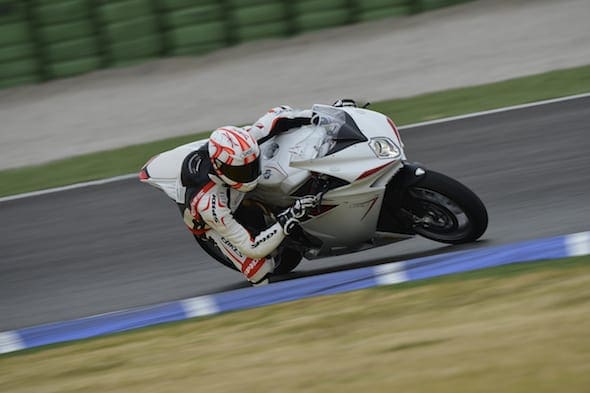 After a successful season in World Supersport with the ParkinGO team, MV Agusta is making a return to World Superbikes in 2014 thanks to a deal between MV president, Giovanni Castiglioni and reigning WSS champions, Yakhnich Motorsport. The Russian team (with Italian crew) that guided Sam Lowes to the title will spearhead next season’s challenge on the firm’s all-new F4 RR. The team will be known as ‘MV Agusta Reparto Corse – Yakhnich Motorsport’ and will be hoping to add a 39th title to MV Agusta’s 38 world championships.

MV Agusta and Yakhnich Motorsport will be jointly committed to developing the bikes for both the World Superbike and Supersport series. They will also closely work together to build replica bikes for satellite teams. Riders are yet to be confirmed but the team will field two in Supersport and one in Superbike – expected late November.

Giovanni Castiglioni said: “The official return to racing is a very important and ambitious step for MV Agusta. However, my decision came directly from my heart. Racing was always my father’s greatest passion and he led his companies to victory in every form of racing: from the 500 GP Class and the Paris-Dakar with the legendary Cagiva to the first world championships won in Superbike with Ducati as well as off-road with Husqvarna. But his true dream was to see MV race again. I am very proud to be able to see this happen.”

Alexander Yakhnich, President of Yakhnich Motorsport said: “We have worked very hard to achieve great results in 2013. With MV Agusta, new and important opportunities have been opened up to us. We are very pleased with this agreement and we are looking forward to achieving a number of victories very soon.”