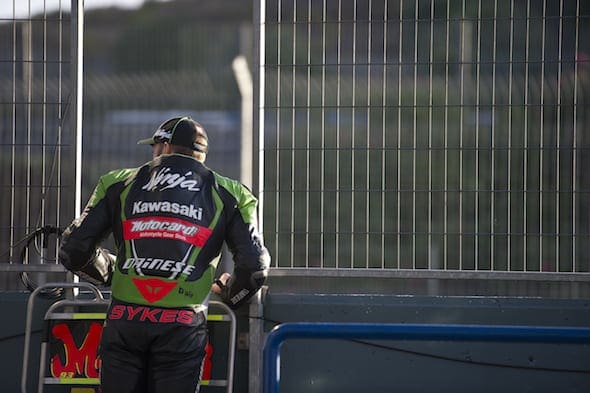 Tom Sykes’ convincing 2013 FIM Superbike World Championship win on his Kawasaki Racing Team Ninja ZX-10R was the culmination of years of work from all concerned. We grabbed Tom to ask him all about it…

Obvious question first, how do you feel now to be World Champion?

“Words cannot describe how I feel. Since the previous round at Magny Cours there are moments where my mind started dreaming and it was magical to even dream I could be world champion. But that was maybe 2% of what I felt after I crossed the line and it became a reality. I was shaking and could hardly even operate the little Ninja. I am on top of the world and nothing can describe that feeling. I have worked so hard to get here. There have been critics in the past but I think I have answered them by lifting that lovely trophy.”

How sweet is it after missing out on the championship by half a point in 2012?

“It only made us stronger. There is no secret in that. I was very motivated in the winter last year. I had some difficult years in Superbike, 2009 and ‘10 and ‘11, but those years moulded me into who I am. It did handicap my career path but I am also grateful for those years because it helped me deal with situations like this. Last year was a big shame and you can look back and see that this year it could almost be double world champion. I lost out to a very talented rider in Max Biaggi back then, and we all know the level of Max. To miss it by only half a point? I was very proud to have got that far but to win it with a race to go this year I am even more proud.”

Along with the pure joy is there a it more relief than anything else, going back to how close it was last year?

“I think when you put it like that it does go back to last year. Last year was like wahhhh, yes! Then, oh no…! There have been people who said that 2012 was Tom Sykes’ best chance and Kawasaki’s best chance has gone out of the window. But I thought differently about that.”

What about being the first man to win for Kawasaki since Scott Russell in 1993, were you aware of the significance?

“I am not a man who looks at statistics at home in the magazines or whatever. When I get home there will be a few things I need to do in my house! It is only when people like the media put statistics to me that I feel even more proud to be the man associated with putting Kawasaki on the winning map. All my family share that moment. Behind closed doors I can be difficult because racing is my life. We have all worked to get here. Twenty years since Scott Russell did the business, so Kawasaki has had a little bit of a drought, but they are back in business baby!”

How nervous where you going into the final round, with a large 37 point lead but, because of that, even greater expectation?

“There was a World Championship lying on my shoulders but I felt cool as a cucumber in the race. I had a good package and we knew that this track was going to be difficult for us. You have seen all weekend that the Aprilias were in the top four, all four in the top few places and also the BMWs were strong here. It is their test track so we know why they are strong here! We did a very good job in France to win the double. One rider here said that that was just because the way our bike was that gave us the two wins. There are moments where you need to be strong and also make the best job you can. In race one in Spain I did the best job I could even if I was not thinking of the world championship.”

No world championship is easy but despite some great testing performances it seemed to be a hard start to the season?

“We have had our small issues but it is times like riding with three broken ribs and a broken wrist in Phillip Island in the first round that put us in this championship-winning position. We have come in quietly under the radar and the last two years have been incredible. We have an absolutely great level of respect for one and other in the team, with Kawasaki and all our technical sponsors. For them, what a moment… I have a lot of people to thank and I appreciate everything they have done. I am very grateful to all the people who have helped me but the main man is my granddad Peter Brook.”

What about your granddad, was he the biker in the family?

“I think if he could have had the chance, if he could have raced when he was younger he would have loved it. He was always passionate about motorcycles. He used to take me to BSB races on the bike and I would be on the back of him. Luckily he has had a successful engineering career and he was able to use some of his money – bless him – to get me going and the rest is history. He still comes to the racing. He was here to witness our first world championship and without him I would not have had the chance to be here, let alone win here. We had a good night celebrating the championship with him. I think it is safe to say he really enjoyed it. I am forever grateful to him. For him to witness a world championship win was priceless.”

Where do you think SBK is compared to the glory days of the late nineties and the early 2000s?

“I think we are in a good level. The riders…? OK, it is difficult when you are one of the riders, because I just think that I am little old me. But at the end of the day the lap times, the speed of the races, the riders are very good. We have had Max Biaggi, Carlos Checa, and Marco Melandri so the championship is in an incredible level. That is not a question. All the manufacturers are in a great level as well. I think the spectacle is always at a close level, and we are not shy about a little bit of paint swapping!”

How do you feel about life now you have achieved this big ambition?

“There has been a lot of work and a lot of sacrifices. I have a fantastic team, a great manufacturer behind me, and it was our day. We worked so hard and finally we have had a beautiful story to get here and this is a new chapter. This year has been a magical one. We have a world championship and my beautiful wife is expecting our first child (which Amy delivrered in fine style yesterday). Last year we got married so I am in a magical period of my life right now.”

Thanks to: Kawasaki Racing Team