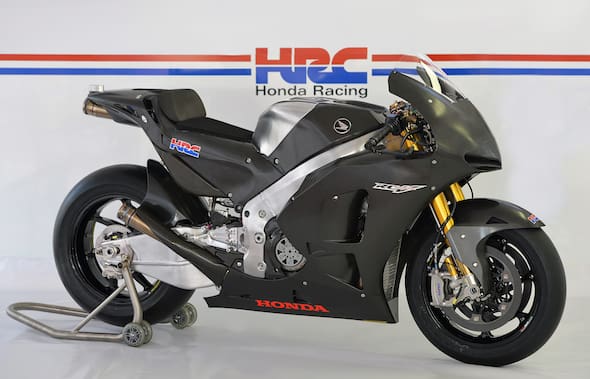 At the final round of MotoGP in Valencia, HRC unveiled the 2014 RCV1000R that Scott Redding will ride next year in Gresini colours. Under new rules, the second-tier prototype will run in the ‘Open’ class (banishing CRTs) and run the Magneti Marelli spec-ECU, guzzle 24 litres instead of 20, and boast a 12-engine allocation for the season.

The RCV1000R, which really should be available for public consumption, is based on the full-factory prototype of Marquez and co. The 90° V4 churns out ‘over 235bhp’ and uses spring valves instead of the RC213V’s pneumatic puppies and has the bog-stock gearbox in place of the seamless-shift to keep costs down.

HRC release the RCVs ready with Öhlins suspension and Nissin brakes, although Redding’s Gresini bike will revert to the Showa kit. All RCVs will be sold to teams, rather than the usual leasing deals. Redding will be joined by Aspar’s Nicky Hayden and Hiro Aoyama, and good old Karel Abraham on the 2014 MotoGP grid.