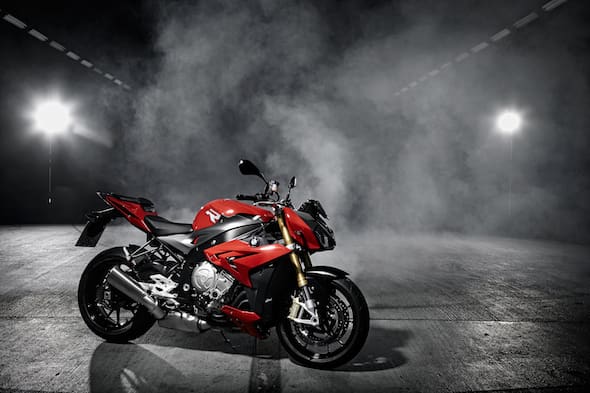 Barring any inclement weather grounding planes in the UK, we’ll be off to Spain next week for the launch of the BMW S 1000 R: essentially a naked version of the award-winning RR.

Of course, a super-naked wouldn’t be a super-naked without some toning down. The RR’s howitzer engine is tuned for peak power of 160bhp and loses 2,000rpm from its redline, but low to midrange grunt is improved with another 10Nm of torque. Bore and stroke matches that of the RR but cylinder head ducts have been redesigned and cam profiles have been modified, while BMW’s in-house engine management system (BMS-X) gets appropriate changes for the ride-by-wire.

The chassis is based on the RR’s ally perimeter frame, the rake angle is increased by 0.8 degrees and the trail is 5mm longer then the RR. Wheelbase has been upped by 22mmm, meaning a less aggressive stance. Kerb weight is 207kg with a full tank of gasoline.
A 46mm Sachs fork sorts the front, while a Sachs unit also looks after the rear. An optional extra is BMW’s awesome Dynamic Damping Control featured on the HP4: semi-active suspension and a magic carpet ride. This trickery revolutionised road riding.

There are two riding modes in standard trim: ‘Rain’ and ‘Road’. Road gives you full power, with the ABS and Automatic Stability Control (ASC) set for dry roads/track. Rain mode is set for diminished grip conditions, with more intrusive riders aids and power limited to 136bhp.

There are other modes available for the 1000 R. Upgrading to ‘Dynamic Pro’ mode (a racier set-up) replaces the ASC with race-inspired Dynamic Traction Control with lean angle sensor, and the engine response is sharper. Race ABS is added too, and can be deactivated for ‘special requirements’. Heated grips and cruise control (yes, cruise control) are also on the factory extras list, as is an HP full titanium exhaust that shifts 4.5kg from the OE item, and adds a dollop of power.