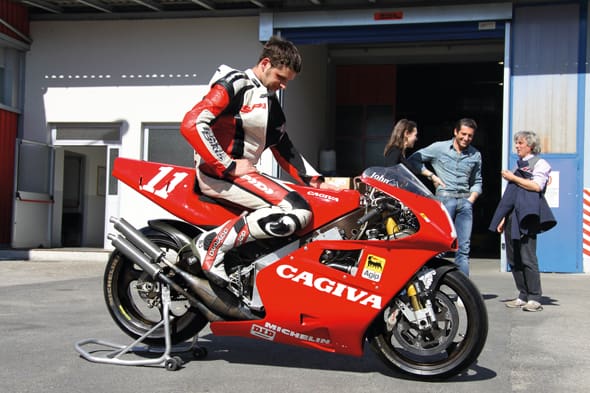 After visiting the MV Agusta factory a while ago, BJ spoke to owner, Giovanni Castiglioni about his dream bike – the Cagiva C594 raced by John Kocinski in the 500cc world championship. Giovanni, son of former MV/Cagiva/Ducati legend Claudio, hasn’t ruled out resurrecting the project.

“You know, it’s a cool bike. I have two ides, nothing to do with MV Agusta. I think it could be nice to take the structure of the F3 and put inside a two-stroke C594 engine, making 197bhp and not even homologate it, just for fun. Imagine the fun you can have with that bike!

“I also have something special in mind, perhaps a limited production and it is not fully decided yet. I would like to make a tribute to my father and we thought about a ‘super’ MV. Then I ask why not make an exact C594 replica of John Kocinski’s? I think the collectors wwould go crazy for it. It has not dated, even now it is beautiful. I do not want to make any money from it, it’s a tribute.