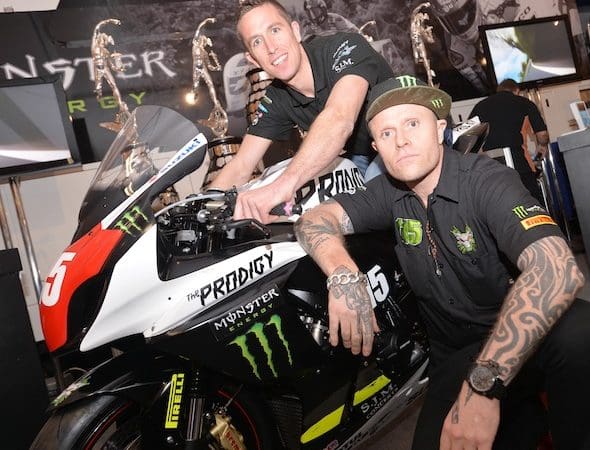 Bike-mad Keith Flint has confirmed his team’s plans for the 2014 season, which include running Steve Mercer (one of the nicest guys in the paddock) at the TT, NW200 and Macau GP, as well as a few BSB rounds. The Prodigy frontman’s Team Traction Control has some TAS Racing-prepared Suzukis at their disposal and will look to build on Mercer’s already impressive results, including a 126.323mph lap at the TT.

Mercer, who is apparently 31, said: “Although it’s a fledgling outfit they have an experienced crew with the likes of Grant Bunting who worked with Shaun Muir’s team last year and we’ve already got some races under our belts.

“I think that this is my chance to kick on and get into the top ten in the Superbike races at the TT. I’m also really looking to get out on a 600 for the first time on the Mountain Course and I think that doing the extra races will help with my overall preparation.”

Keith Flint, himself a racer, added: “After racing myself for several years I know what’s needed to compete on two wheels but I think taking on the mountain course is something I couldn’t dream of doing myself. I believe it’s one of the biggest motorcycle races the world has to offer and I’ll put the best team out there possible. Doing the TT is not just something I want to cross off my bucket list. We are going there to do a job with a very capable rider using some top notch bikes and I can’t wait.”