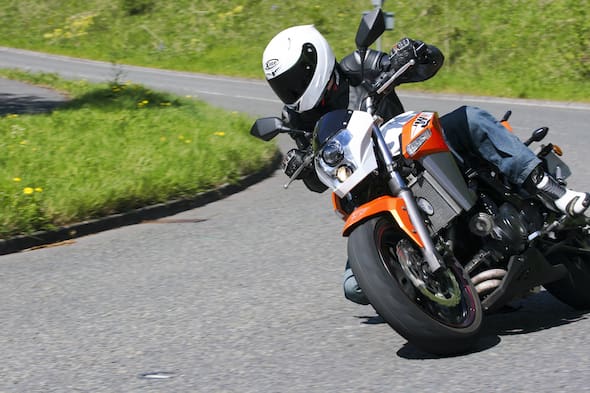 The Chinese motorcycle industry is massive. We think Triumph is a big bike manufacturer, churning out 50,000-odd bikes a year. But this is a weekend’s worth of production in China, which makes around 20 million bikes a year – and industry experts deemed 2012 to be a terrible year! WK is the UK brand name for bikes made by CFMoto from Hangzhou, China where it produces over 600,000 vehicles a year – almost uniquely for a Chinese firm, most are over 125cc. WK Bikes is a wholly owned UK brand, boasting 45 dealers dotted around the country.

Like a lot of Chinese output, the WK650 takes its cues from existing product, in this case the original Kawasaki ER-6n (a bike that the 650 outsells in Australia). Some may be disparaging about this deliberate copying, but this is all that Suzuki did back in 1961 when the company smuggled Ernst Degner and the designs of the MZ two-stroke machine during the Swedish Grand Prix at Kristianstad. The latter has been romanticised in the context of the Cold War, so what will we be thinking of the WK in 50 years time?

So what’s it like to ride? You know what, it’s alright – and I mean that in a good way, not the disparaging way. Dynamically, it runs very competently. The motor has no surprises, its claimed 70bhp the match for its Kawasaki and Suzuki rivals. The fuel injection is smooth and the motor has that friendly parallel twin character that borders on vibey – but never crosses it. While the speedo may be a bit ambitious (and the fuel gauge very pessimistic), it can crack the ton with ease before the motor feels like it’s under any significant strain.

Similarly, it’s all good news from the chassis. The riding position is positive with a nice, tall view and a comfy seat beneath. The bike is pretty well suspended as stock (a good thing as the suspension is unadjustable), and the braking is up to the rest of the package. Down dodgy back roads, it hides its 220kg very well (who knows where it gets that weight from), and it’s only the lazily profiled tyres that spoil the party. Get it on more conventional (read European) rubber and you could do daring deeds on this bike – just like it will be doing at the start of June.

At at £4,199 it’s £800 cheaper than an SV650S. My blinkered prejudices would pick the SV at this point, mainly because it’s a known package – and who doesn’t feel sorry for Suzuki at the moment? But at £1,500 less than an ER-6n, I’d pop out for a Chinese every day. Alright, I’m not getting ABS or European branded tyres, but I’m still getting an awful lot of bike for the money, with a two year warranty.