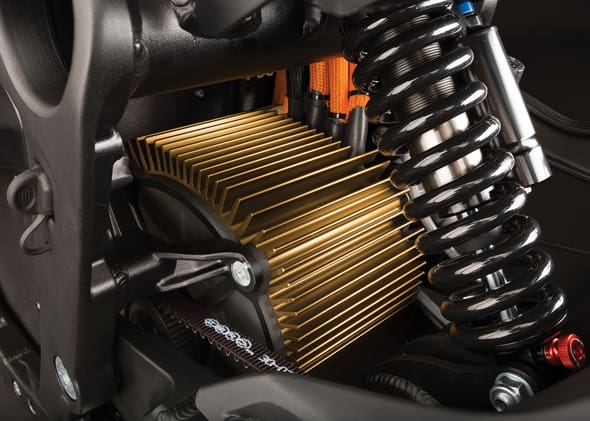 Pepijn Kostelijk is the service engineer for Zero Motorcycles Europe. American company Zero have just spent £1,000,000 developing its own electric motor designed specifically for use in motorcycles and it is Pepijn’s job to be the technical brains in Europe…

“Electric motors are very simple, efficient engines. Petrol engines return around a quarter of the energy you put in, the rest is lost through heat, light and friction. With an electric motor you get around 80 per cent efficiency. An electric motor also lasts longer as nothing wears out.

“Inside the motor there is a central core with around six to ten permanent magnets attached to it. This is basically a drive shaft and one end of it is connected to the bike’s front sprocket. The shaft, or rotor, is very light and strong. If you cut it in half and look at the cross-section you will see it’s hollow in the centre and segmented to reduce its weight while retaining strength.

“Attached outside of the core are lines of permanent magnets that run along its length. These magnets are placed with their polarity north, south, north, south, etc, and then as this core will be spinning very fast they are wrapped to make sure the centrifugal forces don’t fling them off. The rotor is held within the motor’s cases by a series of bearings and are the only parts that lose energy through friction, as nothing else touches.

“Surrounding, but importantly not touching, the rotor are circles of copper wire called coils. If you put a current through these they create a magnetic field.

“The coils work in three phase and are designed to operate in opposite pairs, so when one coil is made into a magnet by electricity the other coil 180-degrees away from it is also activated. This causes the rotor to spin as the magnets attached to the rotor and the now magnetic coils repel each other. Once one pair of coils are turned on and off the next pair are also turned on and off, keeping up the momentum of the turning rotor. Like spinning a bicycle wheel, you start it turning then hit it to get it spin faster, although with the coils there are ‘hands’ all over the wheel’s outer surface keeping it going. If you think how fast this rotor is spinning you can see how precise, and accurate, the activation of the coils has to be. This job is done by a controller.

“The controller (which is where the big orange leads exit) is the heart of an electric motor and can be thought of as a carburetor. It supplies the electricity into the motor and can easily produce 400amps (your household mains is 13amps) so it must be well protected. The voltage is AC and it feeds this electricity accurately to the coils. More than 1,000 times a second the controller works out which pair of coils to send electricity to and how much electricity to send. It does this through a small microchip attached to the end of the rotor, which lets the controller know exactly which position the rotor is in. This reading must be precise as if it is out of synchronization the motor will not run smoothly and can even run backwards! An electric motor is not directional, it can go as fast in reverse as it can forward!

“As the copper wires and the coil never touch there is no wear in an electric motor and the only issue is heat; the copper wires can get very hot due to the electricity. The Zero uses air-cooling and fins.

“How much power can an electric motor produce? That is down to the battery and the controller. The faster the rotor spins the more accurate the controller needs to be, which is very hard to program. Voltage controls the power output. Volts are the top speed, its power. Amps are the range. Increasing volts equals a powerful motor, but no range, which is why electric cars have so many batteries. They operate at 400 volts and are heavy – a bike runs at 115 volts. More volts equals more heat, so we aim for amps and range from 115 volts. Remember, an electric motor makes instant torque, it doesn’t have a peak figure, so on the Zero you are getting 92Nm from the word go.”