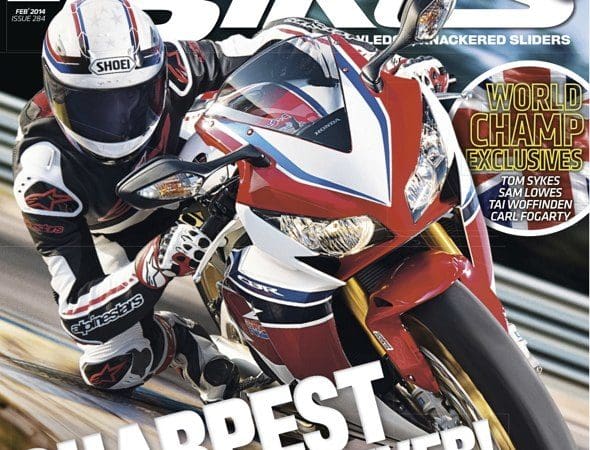 Forget the January blues, because on Planet Fast Bikes it’s February already, and the new magazine is in the shops now (it’ll be in digital outlets on the 7th January – not long to wait!). Rush to the shops now, because the biggest and best sportsbike mag in the world is loaded with new bikes, ace tests, cracking features, top racing and some stunning interviews with FOUR WORLD CHAMPIONS – and a FREE 20 page supplement on Marc Marquez!

The big news this month is the test of the brand new 2014 Honda Fireblade SP – you know, the one with Brembos, Ohlins and a blueprint. Al went off to Qatar as an early Christmas present, and was presented with a sublime machine. But is it enough to make inroads into its competitors? You’ll have to read it to find out…

There was also the first ride on the ridiculous new naked 2014 BMW S 1000 R, a proper slice of madness delivered from our friends in Germany.

And that’s not the end of the riding, because we get our hands on Kawasaki’s new Z1000SX for the first time, and the Black Mamba gets to grips with the longterm fleet to give his verdict on a year’s worth of modifications. It’s also the first month of the newly inaugurated Rider Cup – where the best of Japan takes on the best of Europe. First up, it’s the new Ducati 899 Panigale against the venerable Suzuki GSX-R750. Where will the honours go?

Then we promised you world champions, right? That’s what you’re going to get, in the form of four exclusive interviews with Sam Lowes, Tai Woffinden, Tom Sykes and Carl Fogarty. That’s a lot of chat with a lot of winners…

It should end there – but it doesn’t. We also speak to William Dunlop on his year ahead, as well as get the latest talk from FB regulars WSB Ducati factory star Chaz Davies and Steve Parrish. To top all that off, we’ve also got the latest news and top products, we check in with Bruce Smart on his TeaPotOne journey, we give away £2,500 of Dymag wheels and offer you the chance to win a set in 2014, we offer up an ace ZX-6R Addiction centrefold, you get all the info you need from our Masterclasses, check out what’s been happening with our longtermers and project bikes and, that’s about it… APART FROM – a brilliant 20-page FREE supplement on the rise and rise of Marc Marquez! Featuring awesome photography and insightful features, you’ll have everything you need to know about the MotoGP star by the time you’ve got through all 20 pages.

Stick all that in your pipe and smoke it – you’ll be puffing for some time!