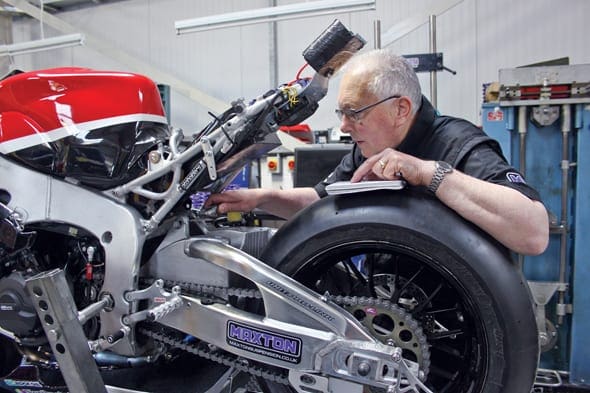 Ron Willams is an exceptional engineer and the man behind Maxton suspension. He’s worked alongside the likes of Wayne Gardner and Ron Haslam in GPs, was involved in the rotary Norton project and was scouted by the Honda factory. Ron was also a world record holder. Proper legend…

It all started in 1969
I was working for Chevron Racing Cars as a jig and tool craftsmen, but I was getting bored. I was always a petrol head and had loads of bikes. I built a bike out of Triumph parts and supercharged it, which took me five years!

That year, I broke the world speed record
It was for a standing start kilometre formerly held by an Italian on a Gilera. He did it in just under 20 seconds. It was held at a military airport up north somewhere, and you had to be invited by the National Sprint Association. I had no contacts in motorcycling, but I soon made some through racing. My parents had no interest and they didn’t really like motorbikes. I rang them after I broke the record to say I’d be late home, and they asked me what I’d been up to. I told them, and the next day the story was in the Daily Express!

A lad at Chevron wanted a frame built
It was for a G50, and was the first frame I built for circuit racing. Working at Chevron, I was making monocoque chassis and was gaining quite a bit of knowledge. I really liked two-strokes at the time and Yamaha TZs were just starting to become popular. Standard Yamaha frames were made out of really soft steel – the stuff they make exhausts from.

1971 was when I thought of the Maxton
We were an engineering company. I built about 25 bikes a year, just on my own. It started in a shed in my garden and I eventually moved to an old chapel, which I kept until just a few years ago. You can have the best frame in the world but it can’t work without good suspension, which is why I started to tweak forks in 1972. We didn’t have suspension dynos then. I just used to be able to tell if it was going to work or not by pushing up and down, and having feedback from riders.

The TT was, and still is, a passion for me
To me, it’s the best test bed for endurance. My idea was to make a frame for the Isle of Man. Frames at that time weren’t suited to the bumps and speed of the TT course, and everything used to fall off the standard Yamahas and the twinshocks weren’t coping. I designed rubber mounted engine mounts which stopped a few issues. In 1975, I made a cantilever frame with a monoshock that won the TT with Charlie Williams onboard. I guess that was the start of my success. Some riders, like Chas Mortimer, wanted the frames for nothing. I was naïve in business but not that naïve!  Chas said “If I win the championship, then I won’t pay for it, right?” I said no.

I worked well with Paul Smart
He was a good rider at the time, competing on big two-strokes at the TT, but also at GPs. He was riding a Suzuki 500, which was the forerunner of the well-known RG500 GP bike. They thought the frame was diabolical, so Paul got me to build a frame. I changed the weight distribution, as it couldn’t go round a corner and would wheelie too much. The engine kept breaking, but we got it running good and Paul raced it at the final GP and did well.

Getting involved with Honda was a big
They were keen because we’d won a lot of races with a lot of riders on the Isle of Man. They had always struggled on the island using Showa. I got a telephone call one morning from Gerald Davidson. He was in charge of a company called HIRCO – Honda International Racing Company, mainly in Europe. He asked if I would go to Japan to have a chat with them. For me, building frames was getting monotonous, so they flew me over to Japan and we negotiated a contract. No engineer had signed a contact before. Riders had, but no engineers. They said, “We have a problem, we have never made contract with European. You will have to tell us what to put in contract.” So I did! We started to build a British version of the NR500 – with the oval piston engine – and I did all the machining and crafting. They shipped over 10 Japanese staff. The engine couldn’t produce the power that the two-strokes could and reliability was an issue, but the engineering involved was absolutely genius. We never managed to win any races but I got to work with Gardner and Haslam.

Then I decided to make wheels
I wanted to do something different, so I ended up making wheels for about five years. The problem was I couldn’t keep up with the demand. Me and the wife were working from eight in the morning until ten at night. I was at Brands Hatch and was approached by a Japanese bloke who wanted to buy hundreds of wheels. I said as a parting comment, do you want to buy the company? He did!

I was approached by Norton in 1989
A lot of my interesting stories involve Norton and the rotary RCW588, but I signed a contract to keep quiet and it’d be a bit naughty if I told you! Norton was a good and a bad thing. Barry Simmonds, who used to mange the Honda Britain team, asked me if I’d fancy working for Norton with tuner Chris Mayhew. We’d all worked together before so it sounded good. When we put it on the dyno, it was making phenomenal horsepower, but that was on Brian Crighton’s dyno and it turned out to be making 50bhp too much – which is where the silly claims originally came from. It was water cooled on the outside but the rotary part internally was air cooled. The lubricant from the engine was sucked through the exhaust and caught fire, so you’ve got a furnace inside which is where all the flames came from. If it didn’t catch fire, oil would get chucked out…

A long time ago, I thought I might be able to make a million!
But after 1980, things dwindled…