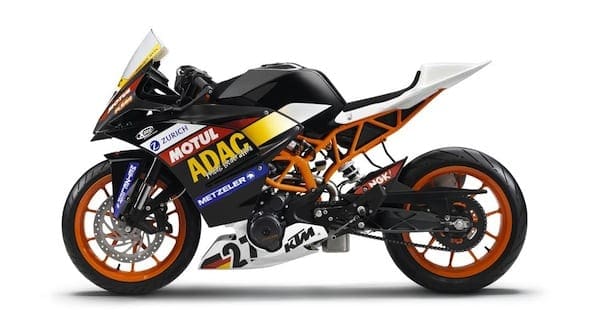 There are still places on the grid to race the funky KTM RC390 in the 2014 ADAC Junior Cup. The one-make series based in Germany tries to promote youth talent and hasn’t done a bad job in recent years: Tom Luthi and Marcel Schroetter are among the winners.

Switching to the all-new RC390 for 2104, the championship includes a race weekend at the Sachsenring for the German round of MotoGP, plus a race at the Endurance World Championship. Any yoof who doesn’t fancy shredding rubber on a bike as dapper as the RC needs their head reading.

If you’re young and fast, you’ve got a few quid, rich parents, or know a drug dealer, click online at www.adac-motorsport.de/adac-junior-cup/de/.