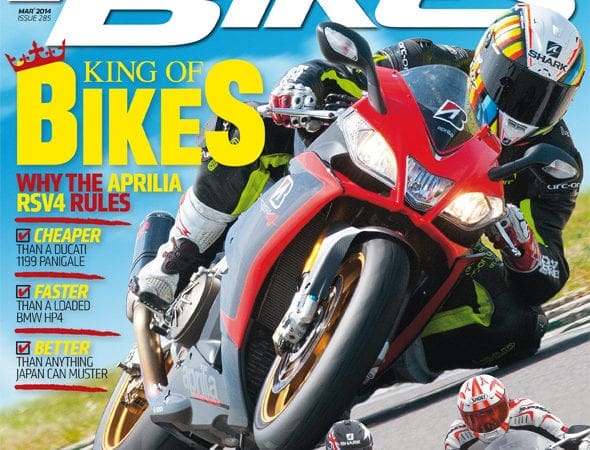 Rejoice! The 285th issue of the world’s greatest sportsbike publication is about to rescue your sodden weekend. Yep, the March issue of Fast Bikes Magazine should be in the shops right now, and available to digitally download in various formats on February 4th.

The cover leads with the King of Bikes: the awesome Aprilia RSV4. We delve deeper into how the beautiful V4 has won Fast Bikes’ Sportsbike of the Year three times, talk to the factory insiders about how it was created, and why it hasn’t sold in big numbers.

The main core test is an Italian bunga bunga party involving three middleweight naked bikes. If the Triumph Street Triple isn’t for you, there are plenty of options including the Aprilia Shiver, Ducati’s Streetfighter and MV Agusta’s brutal Brutale 800. As Berlusconi proved, partying with no clothes on is a winner.

Fresh from the launch in Spain, we sample KTM’s Beast – the 1290 Super Duke R – and try and tame it on UK roads. And another KTM gets good spanking on track, this time the RS250R: KTM’s Moto3 GP bike that’s available to the public. The second round of the Rider Cup features another small-bike pairing and another KTM. The 390 Duke takes on Honda’s CB500F in the latest A2-learner Japan versus Europe.

Bringing things back to Blighty, BJ spent the day at Silverstone with Gresini Honda’s Scott Redding, taking tips from the MotoGP megastar and passing them onto you guys. Other features include a rummage into the wild sport of ice racing – over 60mph and 80 degrees of lean, on ice. And from one extreme to another, we review the 2014 Dakar in stunning pictorial fashion.

There’s also an EXCLUSIVE interview with the biggest motorcycle vlogger around. Yep, we tracked down Baron Von Grumble for a rare chat. Double-Bloody-Decker. And there’s the usual feast of regulars, where you can catch up with Bruce Smart’s global adventures, gaze at the gorgeous Kerri in Addiction, gander at the new products and fresh metal, and learn a thing or two in the Masterclass section.

The back-end of FB wouldn’t be the same without your in-depth monthly racing fix, and we’ve got the usual Chaz Davies and Steve Parrish columns, as well as a guest appearance from Eugene Laverty. The race feature for March is an insight into One Hit Wonders – those who only win a single race.