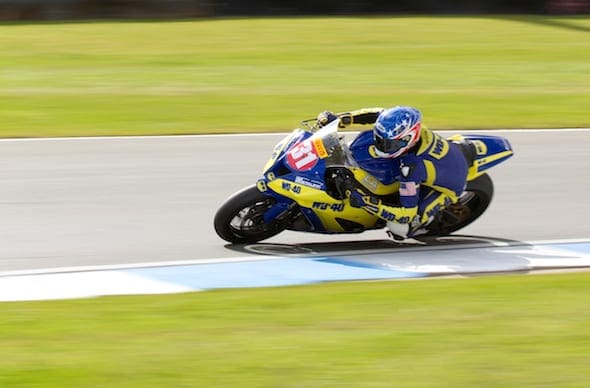 Team WD-40 today joined the numerous worldwide tributes flooding in for Tommy Aquino following the tragic death of the rising motorcycle star. The popular American, also known as Mr Hollywood, was killed in a tragic accident while riding motocross in California. The news has shocked and saddened the close-knit world of motor sport, with Tommy seen as one of the brightest stars of the future.

The 21-year-old enjoyed a flourishing junior career in America before heading to the UK to join Team WD-40 for their inaugural British Superbikes Championship campaign in 2013. Performing in the Pirelli National Superstock 1000, Tommy became an instant hit on and off the track and he was due to return to the UK for the 2014 series of the British Superbikes Championship.

Speaking on behalf of team sponsors WD-40, Amy Briggs said: “The devastating news we have received about the sad passing of Tommy is truly distressing and has left the whole team saddened, stunned and in a state of shock. Tommy was a true star and his performances in the National Superstock 1000 were outstanding. It was always a great pleasure to watch him. Our thoughts are with Tommy’s family at this desperately sad time. We are all very proud that such an outstanding rider and person played such an integral role in Team WD-40.”

On his arrival in the UK, Tommy’s thrilling racing style immediately endeared him to fans and a lack of experience on British tracks certainly didn’t prove a handicap. He used his immense talent to produce a series of stunning displays, appearing on the podium at Oulton Park and Brands Hatch.

But it was on a sun-kissed day at Cadwell Park in August where Tommy enjoyed his undoubted seasonal highlight, leaving his rivals trailing in his wake with a stunning race victory.

The Bank Holiday success was so well received both within and beyond Team WD-40, it was testament to the popularity of this outstanding talent. His affable nature ensured Tommy became like an extended family member to all in Team WD-40 while, outside the confines of the team awning, he proved a hugely popular figure with fans and fellow riders alike.

Amy added: “Tommy was determined to get that race victory and none of us will forget seeing his delight at being on top of the podium at Cadwell Park. He was so determined to be successful in his career and what has happened in the last 24 hours is truly tragic.

“Tommy will be hugely missed by everybody, not only within Team WD-40 but all involved in the British Superbikes Championship. He had built up so many friends in his first year in Britain and we were all excited about welcoming him back shortly for another season.”

Brent Gladwin, manager of Team WD-40, added: “It is with massive regret that we confirm the extremely sad passing of our friend and rider Tommy Aquino. Tommy was a great asset to our team and welcome addition to my family.”