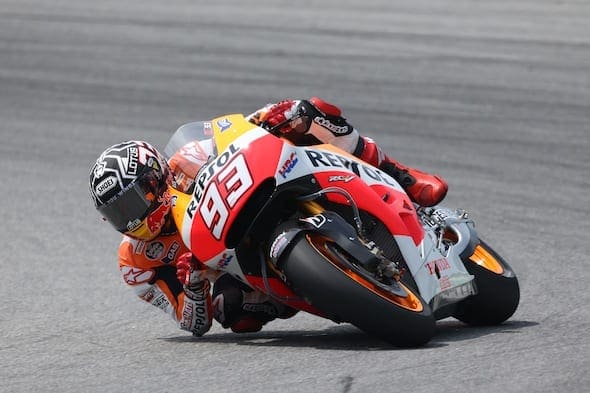 “I’m happy with how this first day went and to have achieved my goal of regaining my feeling on the bike. Of course, at the start I was a little stiff, but gradually I was able to pick up the pace. Today I tested the new rear tyre from Bridgestone and it felt similar to last year. Tomorrow we will continue with our plan: testing out the setup and beginning to draw conclusions from our findings. We put in a lot of laps today and I’m sure that tomorrow I will feel it; even though we train in the gym over the winter, here you work your muscles in a different way”

There were no real surprises from today, although Forward Racing’s Aleix Espargaro onboard last year’s Yamaha M1 looked a bit tasty, ending the day in 7th and faster than the Tech3 youngsters of Bradley Smith and brother Pol. Jorge Lorenzo got relegated to 4th, just behind Dani Pedrosa.

And it looks like the Ducatis are still struggling, despite Andrea Iannone’s quick time he blagged whilst getting a tow. Dovi and Cal Crutchlow ended the day in 12th and 14th, over two seconds off the pace after testing both 2013 and 2014 Desmos.

The production Honda RCV1000Rs also have a bit of grafting to do and are a long way off the predicted lap times. Aspar’s Nicky Hayden and Hiroshi Aoyama finished 17th and 18th, while Gloucestershire’s finest rookie, Gresini’s Scott Redding, was just a second off the more experienced pairing.

Michael Laverty only managed 14 laps all day, after a poorly motor on his PBM bike. Randy De Puniet was also out in Malaysia testing the Suzuki.