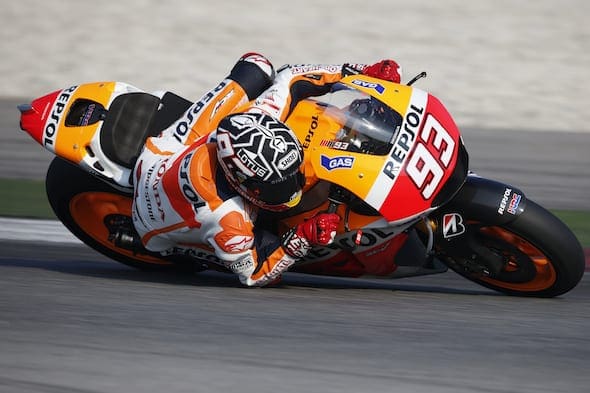 The second day of testing at Sepang ended with Marc Marquez at the top of the time sheets again, and Hondas filling the top three spots. MM93 was the only rider to go sub-two minutes in Malaysia and was a clear 0.4s quicker than his Repsol garage-buddy, Dani Pedrosa. LCR’s Stefan Bradl managed a similar time to Dani for third.

Valentino Rossi was fourth fastest, just over half a second off Marquez. You can bet Jorge Lorenzo won’t be getting too upset sitting in sixth place, as he’ll be doing his usual race runs and full-fuel set-up, maybe. Once again, Aleix Espargaro looked impressive in fifth, although he is, despite rumours, on last year’s Yamaha M1. We can be proud of British firm FTR’s handlebars, footpegs and fairings, and Aleix was a mere 0.6s off top spot. Monster Yamaha’s Bradley Smith had a steady run in seventh and was running similar pace to Lorenzo.

The Ducatis managed to find some overnight pace and, although Dovi and Cal Crutchlow placed 11th and 12th, the pairing reduced the gap to the front to just over a second. The production Hondas also look livelier: Aspar’s Nicky Hayden tailed the Ducatis in 14th place, while Scott Redding ended 21st and went a second quicker than yesterday.

Michael Laverty and the PBM squad had a much better day, with M-Lav ending just behind Redding.