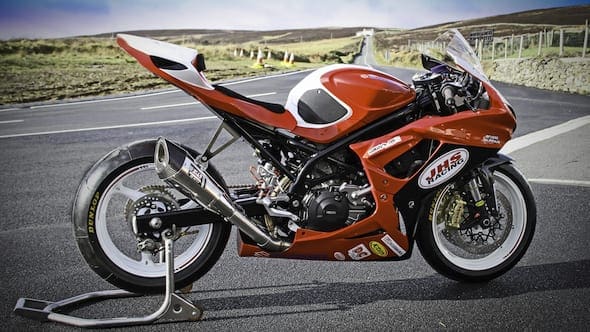 As you may have seen already, this marvellous creation is the work of our tuning buddies at JHS Racing in Bristol. What started life as a happy-shopping Suzuki Gladius (yes, an actual Gladius) has been transformed into a supertwin ready to attack the Isle of Man TT. As you can see, there’s been some serious grafting over the winter and the team visited the island last week to see Manxman and rider, Dave Moffitt.

The crux of the effort has gone into the 650cc twin-pot. Rules say the cases and crank must remain as standard but every other component has been uprated, including titanium valves and a huge amount of cam work.

Perhaps the crème de la crème is the magic under the tank. Building on the old SVs that I rode a few years ago that featured top sprayers and massive throttle bodies (and some lessons learnt on the way), the bespoke airbox and trickery inside is less complex, not that you’d notice. Rather than ram-air, which caused a few complications, the airbox is a completely new item, as are billet alloy throttle bodies with shower injectors. Still expect to see 100bhp at the rear wheel, barking through the Yoshimura R11 exhaust.

Thanks to GSX-R bodywork, the majority of NEC show-goers assumed it was a tricked-up Gixer when the bike made its public debut in 2013. A finer perusal reveals the steel-trellis frame (and swingarm) is the last surviving Gladius chassis component. The entire front-end has been lifted from a GSX-R 600, mated to some custom yokes. After recent testing, JHS has decided on K-Tech suspension, so a 25DDS cartridge kit sits in the GSX-R fork, while a 35DDS shock looks after the rear.

As well as TT duties with Dave Moffit, the team has drafted in ex-British Supersport front-runner and exceptional plasterer, Aaron Walker, who will ride the bike at Thundersport GB races in 2014.

James Holland, JHS Racing’s main man: “The build of this new Suzuki SFV650 supertwin had a massive amount to live up to after what was carried out with the SVs. But I think we have achieved it and then some.

“Weight was the big issue, as well as weight distribution. Both of which are improved at 159kg ready to race, and a 45/55 balance in favour of the front. Track testing will now begin in earnest once the weather breaks!”

We’ll be tracking the progress of the team throughout the season.