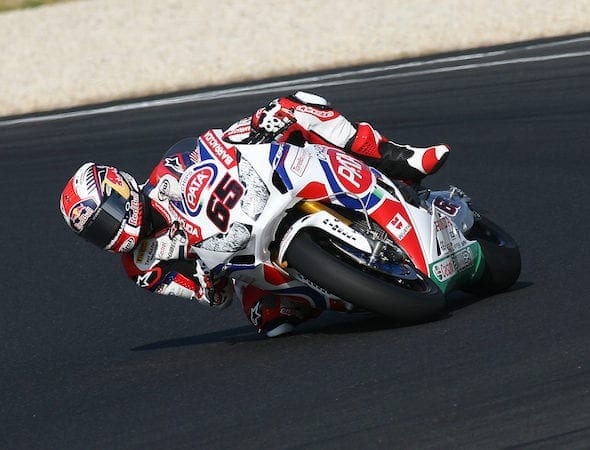 The opening round at Phillip Island is tantalisingly close now, following a two-day test around those super-fast curves. Reigning champion Tom Sykes took control by the end of the test, taking things easy at first, as remember a pre-season crash and injury at the same time and venue last year, almost scuppered his title chances. Weather permitting, Tom could smash the lap record this weekend if his pole performances go on in 2014, too. He managed a 1.30.239 lap during the test.

The biggest and most welcome surprise is the Voltcom Crescent Suzuki team’s pre-season form, right up there, both Alex Lowes and Eugene Laverty. Crescent took back engine development from Yoshimura last year, and this showed in the results, and now too. As a road bike the GSX-R reached its zenith quite a few years ago, the current version not much better than the 2009 update. It’s the rider line-up that has made the difference, not so much in raw talent, but by having points to prove. Eugene Laverty will want to show why Aprilia were wrong to not go balls out to retain him. Alex Lowes will go balls out because he’s young, crazy, and needs to back up his BSB title with success on the world stage. Watching Suzuki will be very interesting this year.

Over with Ducati, Chaz Davies worked on his usual race-pace rather than a fast time. Always a Sunday man, Chaz. Two other Brits desperate for a good season are the Ten Kate boys of Jonny Rea and Leon Haslam. Ten Kate have taken the bike almost as far as it’s possible to go, it’s up to HRC to help them this year, now more than ever. As we all know, so long as the bike is in the ballpark, both have a chance at glory.

Of other interest were the EVO bikes, all going quite well, and also MV Agusta’s fresh entry with Claudio Corti and the F4-RR hasn’t embarrassed themselves one bit. The same can’t be said for the Hero EBR duo though, Geoff May and Aaron Yates, they’re not having a great start to the season. Engine woes kept them off the track for most of the first day, and when they got out there the bikes were incredibly slow down PI’s light-speed straight. One failed to hit even 170mph, the other managed just a couple of mph more, while the rest of the field skirted 200mph. Ouch…

It’s just round one, but we already get the idea it may be a tough season for the joint Indian-American-Italian effort. Welcome to the party, boys!

Big love to Kel Edge for the pics…