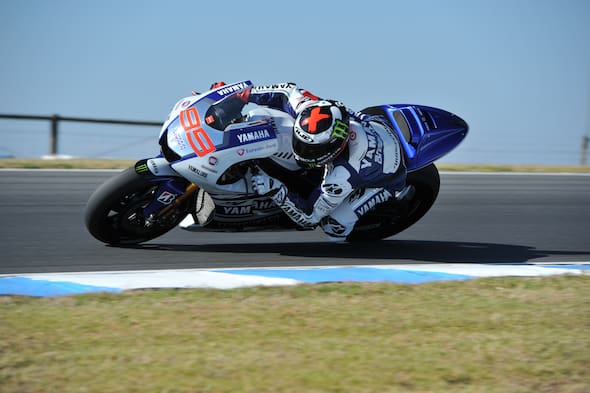 After the utter farce that was MotoGP at Phillip Island in 2013 (although it made for great TV), the three full-factory teams have spent the past few days testing new Bridgestone rubber down under. Joining Repsol Honda, Yamaha and Ducati on track, the Marc VDS and Aspar Moto2 teams have been trialling Dunlop tyres after a similar clusterfeck in the mid-class. Tyres, of any spec, just don’t seem to cope with the demands of Phillip Island.

We can’t read too much into the times (it’s fundamentally a tyre test) but Jorge Lorenzo is quickest so far. Pedrosa was a quarter of a second off J-Lo, as was Dovizioso.

Lorenzo has also been testing a fugly looking fairing designed to help with strong winds at PI. It looks as though he and the M1 have recovered from a dismal Sepang test where the toys went right out the pram.

If you follow Cal Crutchlow on twitter, you would have seen the sector times from the test: Tito Rabat and his Kalex were actually quicker than the Ducatis and Dani Pedrosa in S1, and only 0.1s off the factory M1 of Valentino Rossi. Corner speed ahoy.