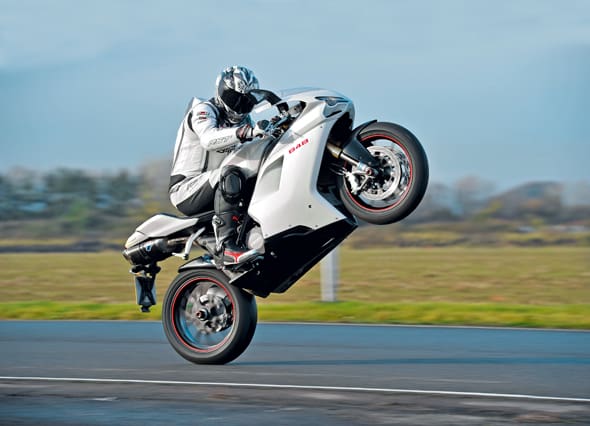 Fast Bikes mag and White Dalton Motorcycle Solicitors are celebrating 10 beautiful years working together. Since 2004, our legal pages have been compiled by Andrew Dalton and his bike-riding barristers and solicitors at White Dalton, offering real-world lawful advice on how to escape punishment, how to deal with court, and what not to do in the first place. Have a question for Andrew? mail@whitedalton.co.uk

Q: I usually ride a BMW R1200 GS, but took a I took out a new Ducati for a test ride. While on the test ride I went for an overtake. I gunned the engine in third and the front wheel popped straight up. I can wheelie, but I genuinely did not mean to do it. As I can wheelie, I took the snap decision that I’d be better off passing the vehicle on one wheel, before rolling off the gas and moving back into my correct lane. It was genuinely an accidental wheelie. As soon as I tucked back in front of the car I checked my mirrors they were full of blue lights. I had just overtaken an unmarked Police car and was soon shown my handy work on camera. It doesn’t look good. I told the Officer exactly what I am saying to you now, that I did gun the bike, but I genuinely was not expecting the front wheel to come up. I run a successful business, which is completely reliant on me having a licence. I’ve got 10 or so employees who are completely reliant on me having a license, and I am desperate. I have received a summons for dangerous driving and I’m now at my wits end. All the local Solicitors I have spoken to have said to offer a plea to dangerous driving and live with the consequences.

AD: You have a lot at stake. Potentially, you have a defence as your wheelie was caused by a momentary error of judgement, rather than continued course of reckless driving. This means that your case, if properly argued before a reasonably sympathetic jury or Magistrates Court, could be a careless rather than a dangerous driving offence. Careless driving does not carry a mandatory 12-month ban and a retest for all classes of license. The fact that you immediately explained yourself to the Police on video, is very useful. My advice to you is that you have a potential defence, albeit one that you could lose. I’d say you are fairly evenly balanced between a guilty finding on dangerous, or the alternative plea of careless either being accepted by the prosecutors, or potentially accepted by a jury or magistrates. You’ll certainly need expert evidence as to why you made an accidental cock up of your overtake. If I were you, with what you have at stake, I would run a defence to the dangerous driving and volunteer a guilty plea to the alternative count of careless driving. You need to be represented by somebody that can pull together the appropriate evidence that you need to prove your case. Don’t expect a particularly sympathetic hearing from the magistrates. Any advocate on the day will have an uphill struggle reducing your charge from dangerous to careless, but bearing in mind the consequences of a 12-month ban for you, I would pay for the best defence you can get.

White Dalton deal with personal injury claims and their sister company, Motor Defence Team, deals with all the motoring offences. They know everything about bike law. Andrew is a former London motorbike courier turned barrister and solicitor, and we know he’s good. All the White Dalton lawyers are qualified barristers, or solicitors, or both – and they all have full bike licenses, too. They don’t act for insurance companies or the prosecution. They are Britain’s most specialist law practice, and if they don’t know the answer to your question, there probably isn’t one. Don’t rely on the advice from your insurance appointed solicitor, get proper independent advice.