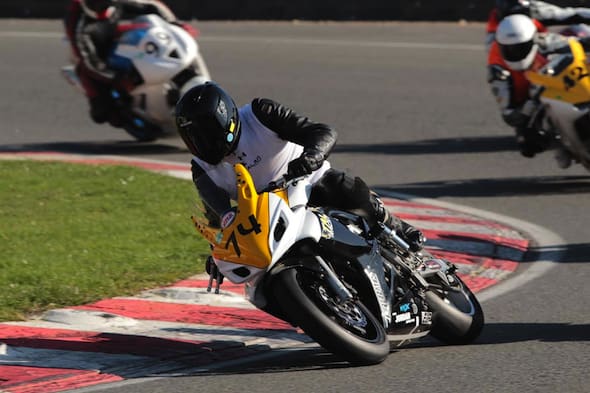 Talan Skeels-Piggins, Fast Bikes’ friend and inspirational legend to many, made another comeback of epic proportion this weekend at Brands Hatch. As regular readers may already know, Talan was paralysed from the chest down after a road accident 11 years ago but that hasn’t stopped the man.

After fighting to gain a road race licence, TSP became the world’s first paraplegic racer and has spent the past few seasons bashing fairings in the Minitwins class. He’s also set up The Bike Experience: a charity to encourage other riders with all types of disabilities to get back on a bike.

Unfortunately, Talan had a naughty crash last year and badly smashed his leg, also sustaining other injuries. Some intense physiotherapy and sheer mindpower saw him return to racing at Brands Hatch this weekend for the first round of Thundersport GB. He was regularly lapping in the 58s around the Indy circuit, and claimed a few top-ten finishes in the Minitwins.

He tweeted yesterday – “11 years ago I went under the wheels of the oncoming traffic and was paralysed from chest down. What’s your excuse?”

So, what is your excuse?!