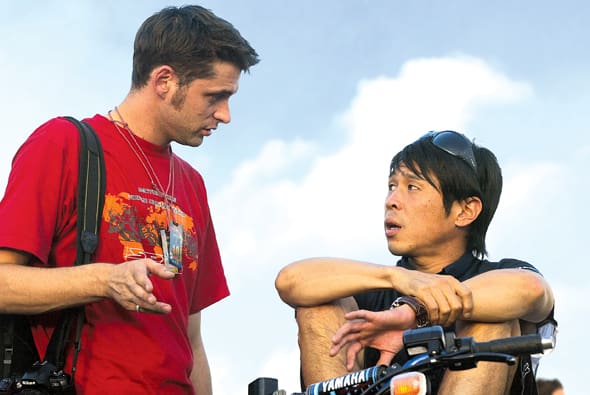 In 2006 Noriyuki Haga was back with his beloved Yamaha squad in WSB, and reminding all the regulars just how good he was. I had arranged a meet with him after some Yamaha brass had asked about Chaz Davies (they were considering him for replacement rounds on an R6).

As thanks, Haga was made available for an interview. Prior to meeting him though, I’d been told by a few people he’d given up smoking. We sat outside the Yamaha hospitality, and at this time I still smoked. We were surrounded by dozens of Italians dragging on fags, so twenty minutes in had a ciggie too. For the next ten minutes Nori may as well have been absent, as he wasn’t listening at all and seemed really pissed off.

Then in the middle of asking a question, he slammed his hand on table and demanded to know why I hadn’t offered him one! I replied that I had been told he’d quit, and at that point he become extremely unhappy. Not with me however, as it transpired that I wasn’t the first person to say this to him. Someone had started the rumour, for whatever reason, and it had spread. Back then Haga still loved his fags (just like Yukio Kagayama), so he was really put out with whoever had started it, yet nobody could ever identify the original source. It was funny though in many ways, as he was fighting for a title and pretty happy at that time, but here he was getting really quite irate about the fact people believed he’d quit the fags!