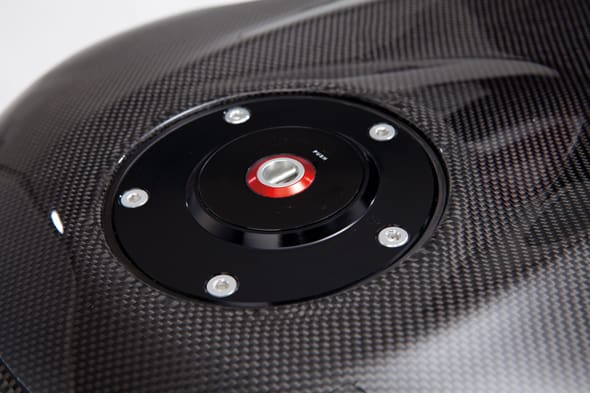 Know your mpeg from your pre-preg? We asked a pro to talk us through carbon fibre. Paul Hutchings is a partner in Zero Limits: a British company that makes over 20,000 carbon fibre products a year for everything from motorcycles to Le Mans cars.

“Carbon fibre is just that, strands of pure carbon, woven into a fabric like granny would knitting a jumper. As such, you can have a thick knitted carbon fabric or a thinly knitted one. All depends on the properties of the product you aim to build.

“Making the carbon strands is very expensive. It’s a complicated process – they take raw carbon and create it into filaments, which are then woven together into strands and finally a fabric.

“Once you have the matting there are a variety of different things you can do with it. The matting itself isn’t very strong and can be easily cut by hand, however when you lay it on top of another layer of matting, adding special resins to set, it becomes incredibly strong. The key to its strength is the direction of the weave, which can either be a plain weave or a twill weave. The plain weave is a simple crisscross at 90-degrees while the twill is a 45-degree weave and arguably looks better.

“All the strength in carbon fibre comes from its laying up as carbon itself and is only strong in a certain plane or direction. A typical product would have one layer, another on top with the weave at 45-degrees and then a third layer at 45-degrees to that, which would be incredibly strong. Occasionally, the middle layer is FRP (fibre reinforced plastic), which is cheaper than carbon, and can add flex.

“Pound for pound, carbon fibre is stronger than steel, but you have to get the layers correct. This is another plus point of carbon, you can actually build flex into carbon fibre by varying layer direction.

“Wet lay is fairly old technology and involves taking a dry bit of carbon matt, placing it in a mould and then coating it in a resin before adding another piece of matt, more resin, and finally when you have enough layers, heating and applying pressure or a vacuum to remove the air and create the product. Wet lay also tends to have a poor finish due to air bubbles getting trapped in the resin.

“Pre-preg is a far more accurate process as the carbon matt is ‘pre-impregnated’ with resin. The resin is an epoxy resin that glues the carbon together and makes a solid structure.

“As pre-preg already has the resin imbedded in it, you just layer it in a mould and then heat and apply pressure and a vacuum over around six hours in an autoclave to create a product with far more ccuracy. The only issue is that pre-preg matt has to be kept in a giant freezer to stop it going off and hardening, which is tricky as we buy it in 100m long rolls!

“Once the carbon fibre product leaves the autoclave we trim it to shape as there is quite a lot of excess material due to the mould, and finally finish it with a UV-resistant lacquer. At the moment most carbon is hand trimmed, however we are about to invest in a CNC machine, which will trim to an accuracy level of around 0.2mm.

“The final trim is the biggest issue when it comes to carbon parts – fitting correctly. It doesn’t take much variation for a part to fail to line up or fit properly. Once trimmed, lacquered and polished, the carbon part is ready to go and will almost certainly outlive the machine it is fitted to!

“Finally, it is worth mentioning some carbon safety tips. If you cut carbon always wear a mask and treat the dust like asbestos. It is horrible stuff and can do your lungs some serious damage. The carbon splinters can be very sharp as well so always wear gloves.”