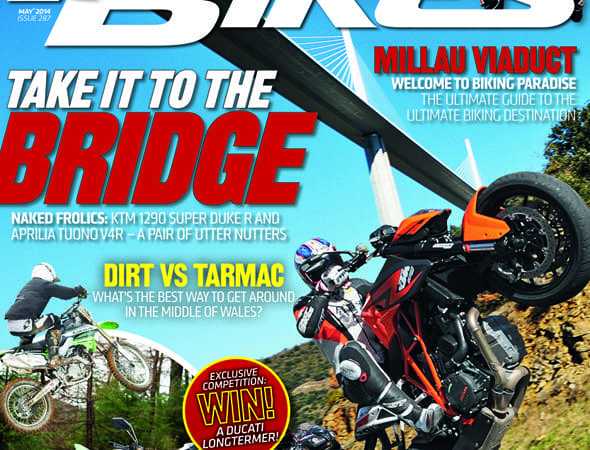 That’s right: the latest issue of the UK’s best sportsbike magazine is OUT NOW. While subscribers are rejoicing in their fresh copies, issue 287 of Fast Bikes Magazine – the May edition – is in all good newsagents this weekend and will be available to download in digital format on the 31st of March. As usual, all 132 pages are crammed with sportsbike hedonism: the best new metal, some slightly older bikes, the latest products and gizmos, plus some insightful and crazy features.

As you can see from one of the finest covers around, we got miffed with British climes and trekked south to the Millau Bridge in France. The roads surrounding the record-breaking bridge are record-breaking in themselves, boasting some insane mountain twisties and scenic beauty spots. Armed with KTM’s all-new 1290 Super Duke R and the Aprilia Tuono V4R, we terrorised the French Tarmac and just about avoided arrest. And returned with some interesting results…

Back in sunny Britain, that funny, yellow round thing made its 2014 debut. We got immersed in some warp-speed mayhem and pitched Kawasaki’s ZZR1400 against BMW’s K 1300 S in the latest instalment of Fast Bikes’ Rider Cup. Other bikes making test appearance in this month’s issue are MV Agusta’s revised F3 range – Roosty went to Paul Ricard to sample these Italian beauties. Plus, with the help of Bob Collins and Simon Crafar, we go deeper into the Suzuki GSX-R1000 and analyse the bike that’s received a mixed reception in recent, techno-filled years.

After the successful campaign last year, we’re offering another exclusive chance to win a Ducati longtermer in 2014, including your very own page in Fast Bikes every month. Yes – A FREE DUCATI FOR 2014!

And then we’ve got some bizarre features this month: Al flew over to Mondello Park following an offer to join an endurance racing team. Honda C90 racing wasn’t exactly what we had in mind. Meanwhile, BJ jumped on the 2014 Kawasaki Z1000 and setup a race with Adam Extance (son of Dakar legend, Mick). BJ rode around the mountain, Adam rode over it. Completing a truly eclectic mix, there’s also some crazy German road racing to ogle at.

As we edge ever closer to summer, we gathered together a medley of one-piece leathers starting off at £500. There’s also a guide to riding some iconic European circuits, and we grab 10 minutes with Freddie Sheene as he embarks on his debut racing season – one club race, and he’s off to the Spanish CEV championship! Can’t think where his talent comes from…

And then there’s the usual feast of regular gold, such as Teapot One’s adventures, the latest must-have products, Addiction centre fold, essential advice in our Masterclass pages, all the current Tracks and Travel news, and we welcome some new bikes into our 2014 longterm fleet.

Finally, the race section is packed with the monthly columns: Martin Jessopp talks us through his latest TT preparations, while Chaz Davies and Steve Parrish provide the usual.