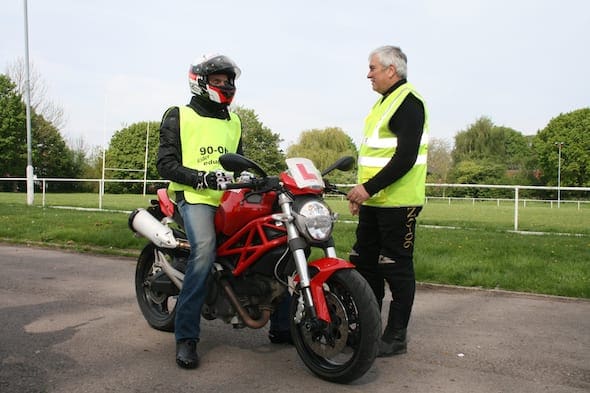 While most of you lot were watching British Superbikes or enjoying the bank holiday sunshine, we were sent to Coventry yesterday – to watch Fast Bikes columnist, Chaz Davies attempt his CBT.

The ex-world champion and current factory Ducati pilot swapped his one-piece for an earpiece, and his works Panigale for a Monster 696. And instead of 200mph, Chaz was lucky if he reached 30mph on the beautiful streets of Coventry.

The Welshman has been eyeing up a full road licence for a while now. Thanks to the combination of a Ducati contract, Ducati’s new Learn to Ride scheme, and guidance from the experienced 90-One rider education, Chaz nailed his first part of the ever-complicated Direct Access. Next up is the two-part test.

“I’ve been wanting to get my licence for quite a long time now, but genuinely wanting to get a licence to ride, probably the last few years.  I’ve always thought it’s something you should have.

“For me, it’s just a way to chill out. I think I’ll get something a bit more on the tamer side, so I can go out on the road and enjoy myself.”

Next time you see a tall, spindly dude wearing an X-lite lid and Alpinestars gear on the UK roads, think again before taking him on. We’ve got exclusive access to the next chapter in Chaz’s Direct Access escapade. You can read all about it in the magazine very soon.