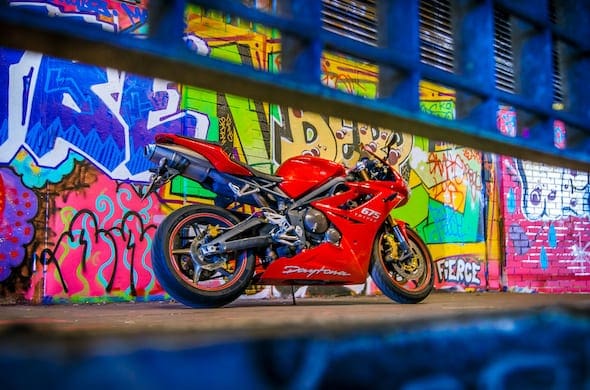 There’s a lot very right and not much that’s not to like about this picture, which found its way to the office via our Facebook page. I’m going to get the technical demerits out of the way first, I know it’s boring stuff so please do keep reading. It’s a little bit fuzzy from the slow shutter speed (just under one second), and Ben and/or his camera hasn’t quite nailed the focus. There, that’s it. At the size it’ll appear on the internets no-one will notice this anyway, I’ve only mentioned it because with a bit more work on this stuff – some practice and careful checking – we don’t have to worry about it so much and can get on with making some more awesome pictures.

The overall feel of the whole picture is fabulous. I really like the slightly warm ambient light with blue light for highlights and foreground railings – that really works. Shooting through the gap in the railings at an angle was a great idea. If I was going to go overboard I’d say something about the cold, geometric foreground shapes making a contextual contrast with the curvy warm red bodywork. I’m going to guess Ben carries bicycle lights with him on night shoots…

I think this is about the best angle to shoot a 675 Daytona. It makes less of the slightly bulbous nose and more of the frame details and exhaust. I’ve got a thing about having the bike pointing into the page as well, and combined with the angle of the railings gives the shot a feeling of intention rather than just here’s the bike. Not that the image doesn’t also stand up as a great example of a beauty shot – the red stands it out from the blue and green background really nicely, and all the colours are about as strong as you can go without losing detail or an impression of the contours.

If I’m really going looking for problems, and this is only because I’ve been looking for a while now, I’d say the white lettering off to the right is a bit of a distraction. Not a big problem, and it’s a fair price to pay for leaving plenty of space around the bike.

So if advice is being solicited, all there is to say is if your shutter speed is getting down to 1/15th second or slower and you don’t want to use a tripod (which is a massive buzz-kill after all), take a whole bunch of shots at once – maybe five at a time – and check to see if one of them has really nailed it. Or if you do use a tripod, turn off your camera’s image stabiliser as that can introduce some blur. Other than that I hope Ben keeps on doing what he’s doing as this is a great example of a well thought out static motorcycle image.